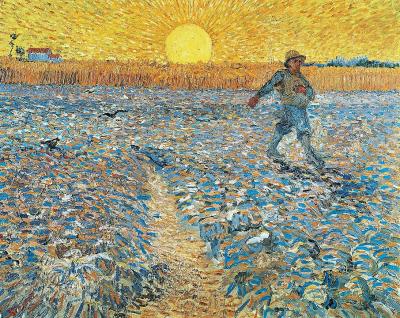 ROME – Climate change protesters threw soup over a painting by Van Gogh and were decried by Italian Minister of Culture, Gennaro Sangiuliano, who called the act ‘ignoble.’

Members of the climate protest group Ultima Generazione on Friday tossed green soup onto the Van Gogh painting The Sower, which is currently on display in the Palazzo Bonaparte. Video footage shows that protesters then glued themselves to the wall beneath the painting, with one of them shouting “You are angry because we have dirtied some glass that will be clean tomorrow but in several years your children will have nothing to eat. We should be bursting with rage because we are risking a future of death, war and famine.” Other visitors to the Van Gogh exhibition in Rome could be heard shouting “shame on you” in the clip that was posted online.

This is the latest in a series of similar incidents across Europe that have aimed to draw attention to climate change and to protest government inaction on the issue.

Gennaro Sangiuliano, the Italian Minister of Culture, sharply criticised the protest, “Attacking art is an ignoble act that must be strongly condemned. Culture, which forms the basis of our identity, must be defended and protected, and certainly not used as a megaphone for other forms of protest. Yet our cultural heritage must also be protected from the consequences of climate change. This most recent gesture cannot pass as a legitimate expression of protest. It is appropriate today to remember that crimes against cultural assets are punished severely and that the perpetrators are liable to prosecution.”

Ultima Generazione describe their protests as “nonviolent civil disobedience actions” on their website. The oil painting was not damaged by the act, as it is protected by a sheet of glass.