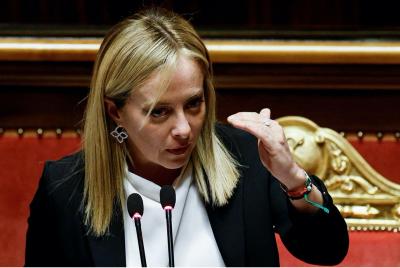 ROME – New SWG poll publishes results Italians’ thoughts on hot button topics, including that 46 percent would rather concede a part of Ukraine to Russia than continue the war, the poll reports. The recent poll also finds that one in two Italians are dissatisfied with the new government under Meloni.

The SWG poll found that much of the older population was concerned with utility bill costs in the face of the energy crisis, and that the younger population was more concerned with the broader issue at hand, climate change. 56 percent of the poll respondents, the abnormally hit temperatures that Italy has been experiencing are “considered a source for concern,” and of that percentage, 64 percent of respondents were between 25 and 34 years old. Regardless of reasoning, the poll shows that a quick resolution between Russia and Ukraine is paramount for many Italians, even at the cost of allowing Russia to take Ukrainian territories.

The same SWG poll published findings about the controversial right wing government that has recently been elected. It was published on Wednesday that one in two Italians are dissatisfied with the government, 17 percent of respondents saying the party is “too old” and another 12 percent commenting that it’s “too political.”

The dissatisfaction with the new government can be attributed to the differences in what is important to the elected party and the people. The SWG poll reported that some of the most talked about issues during political debates are important to only a small portion of the Italian population. Justice reform and increased security are urgent issues to only 12 percent of respondents, and constitutional reform is only of concern to a mere 3 percent. Almost half of the poll respondents reported that the priority of the government should be to take action in reducing high costs of living, with 42 percent of Italians concerned about this issue. The second and third most important issues for Italians are increasing workers’ salaries and support for low-income families, both polling at 31 percent of Italians indicating these issues’ importance.

Despite the dissatisfaction with the newly elected government, the Brothers of Italy party is still polling as the most popular party, with 29.1 percent of Italians backing it.