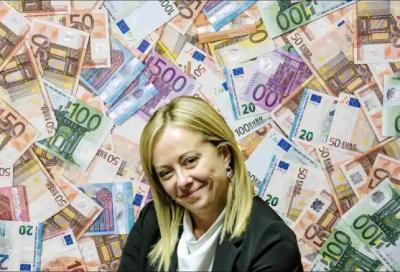 ROME – Italian prime minister Giorgia Meloni’s newly inaugurated government came under heavy criticism for a proposal from her populist allies Lega to ease restrictions on cash transfers, potentially jacking up the limit from 2,000 euros to 10,000 euros.

The prime minister claimed that limits on cash transfers had no effect on the black market, and that the measures were in fact harming Italian competitiveness compared to other European countries such as Germany and Austria, who have no such restrictions. The proposal, put forward by Matteo Salvini’s Lega, aimed to raise the current ceiling of 2,000 euros to 10,000 euros. Yet in a slight concession on Friday, Meloni told parliament the new cap would only be between 3,000 and 5,000 euros.

Critics argue that such an increase would only benefit criminals, as illegal transactions are conducted almost exclusively in cash. On Thursday, Giuseppe Conte, leader of the Five Star Movement said, “Walking around with bags full of cash does not correspond to the needs of the citizens but to criminals and tax evaders.”

In a study published in October 2021, Banca d’Italia reported that “a rise of the limit on cash transactions causes […] an increase in the activity of the black market: one percent of cash use brings with it a rise in ‘shadow economy’ activity of between 0.8 and 1.8 percent”. The Via Nazionale economists concluded, “The restrictions on the use of cash are an effective tool in the fight against tax evasion.”

In response to the proposal, Giuseppe Busia, the president of the Anti-Corruption Authority, questioned the reasoning behind Meloni’s plan, “Raising the cash ceiling? The market does not require it, because beyond certain amounts one does not pay cash anymore, unless one is dealing with illegal activities or the black economy.”