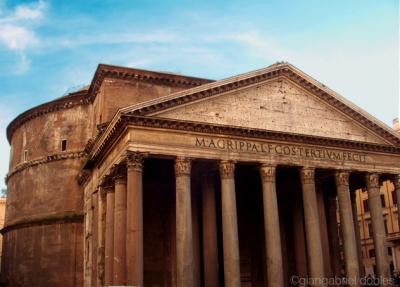 ROME- Romans are a lot like New Yorkers: they are thick-skinned to outsiders and seemingly unaffected by the qualms of visitors.

If you’ve ever taken time to immerse yourself, you realize that they warm up over time, a lot of it. Rome is still a city that boasts a base of ‘mom and pop’ stores which makes it tons of fun to explore and makes the fastest way to people’s hearts investing your money (effectively energy) into vouching for what they’re all about. By prodding the butcher for ideas in cooking for your Easter potluck or asking the florist about their insight into impressing your girlfriend you can win your neighbourhood over in time. By roaring in the streets with your group of American friends at night, pissing in historic fountains, you can find that the tide in your neighbourhood can turn very much in a negative direction to say the least.

In the streets of Rome, law rules, leaving the boisterous and arrogant to be tamed. The point is that every positive conversation with people in your neighbourhood becomes the seed for a relationship and enlists someone who is conscious of your existence and well being. When patronage is involved this amplifies, recruiting natives as the eyes of your neighbourhood. An old woman’s grandson ends up being a police officer, the priest’s best friend is the grocer, and the world goes round. They will bring you into their universe and look after you if you want to participate in it. You can’t control the world beyond, but you can at least breath a sense of relief when getting off the bus into your neighbourhood at night. In this regard, Italyis still in many ways provincial, even in its major cities.

My favourite example of this used to occur on Saturdays upon waking, when I realized I was in need of a haircut. The first time I was hungover, grabbed a cappuccino and meandered to the local barber, soon to learn another lesson in embarrassment. When I first arrived at this hole in the wall I stood awkwardly at the door, amused by a row of old men who had their faces buried in their newspapers and sat in total silence. The barber worked his way down the row until arriving to me as I wondered where to sit, and whether to pay before or after. He motioned to leave two 1 euro coins on the mantle and sit down. My directions went unheeded and I was another head bobbing in the row while the barber went to work silently. It was one of the best cuts I ever got. I didn’t say a word and found the serenity in it, bringing the newspaper with me from that point on.

This is one example of the strange language that permeates Rome. As much as there are dumb minds fixated on turning it into another faceless European-consumption hub, it will always have that attitude. Master this language and learn to express yourself in few wise words and you will walk into any cobbler, pizza place or cafe and earn respect. If a pie flies onto your table at a pizzeria and you’re still perplexed just smile because they’re probably being affectionate in Roman dialect.

In the following instalments I’ll aim to share my experience in grasping this interesting dynamic of a city many are prepared to die in since their birth. Around every corner there are stories, good and bad, and things that will never be discussed in your guidebook. Most of all if you’re preparing yourself to be a resident for a while, my anecdotes might simply be of practical assistance. A friend once told me resolutely that it takes a year to get settled anywhere, so imagine applying this to Roma Bella. If you play your cards right it will be the most intense and beautiful year of your life, so make friends with the neighbourhood and you might stick around a while like I did.