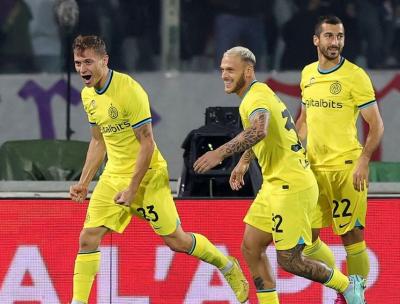 FLORENCE – Inter Milan beat Fiorentina 4 – 3 in a dramatic match at the Artemio Franchi Stadium in Florence on Saturday, with two goals scored after the 90th minute.

Midfielder Nicolò Barella opened the scoring for Inter in the second minute when he capitalised on a through ball from his teammate, the Argentinian forward Lautaro Martinez. After a quarter of an hour the striker then doubled the Nerazzuri’s lead by dribbling past fellow Argentine Lucas Martinez and placing the ball in the bottom right corner of the net. In the 33rd minute, Inter defender Federico Dimarco failed to clear a cross into his box and instead struck the knee of Fiorentina midfielder Giacomo Bonaventura with his studs, conceding a penalty. This was successfully converted by Brazilian forward Arthur Cabral, who, with a graceful skip, sent the Cameroonian Inter goalkeeper André Onana diving to the wrong side. In the minutes that followed hostility and aggression flared and the referee had to hand out three yellow cards.  At half time the score stood at Fiorentina 1, Inter 2.

The next goal came from Viola player Jonathan Ikoné, who carried the ball swiftly into the Inter box from the right wing and curled a shot into the far corner to bring the teams level at the hour mark. The Nerazzuri responded with a penalty goal in the 73rd minute from Martinez, who had been fouled by Fiorentina goalkeeper Pietro Terracciano. Then, in the 90th minute when the game seemed to be a sure victory for the Milanese side, Fiorentina substitute Luka Jovic hit an acrobatic volley to tie the score 3 -3. Yet Inter were implacable and continued to attack in added time, finally scoring in a counter attack where the Fiorentina defence failed to deal with a low cross from Barella, which was knocked in off the shin of Armenian midfielder Henrikh Mkhitaryan, winning the game in the 95th minute.

In other Serie A matches, Juventus continued their return to form by defeating Empoli 4 - 1 in Turin on Friday. Salernitana beat Spezia 1 – 0 at home on Saturday, while at the San Siro AC Milan climbed to second in the league by scoring four against Monza, who could only manage one goal in return. On Sunday, Udinese lost 1 - 2 to Torino in Udine and Bologna won 2 – 0 at home against Lecce.  Lazio managed to score twice even without their star-striker Ciro Immobile, who is currently injured, as they beat Atalanta 2 – 0 in Bergamo. Napoli remain unbeaten at the top of the league, outplaying Roma at the Stadio Olimpico for a 1 – 0 victory. Cremonese and Sampdoria have a match scheduled for Monday evening, as do Sassuolo and Verona.