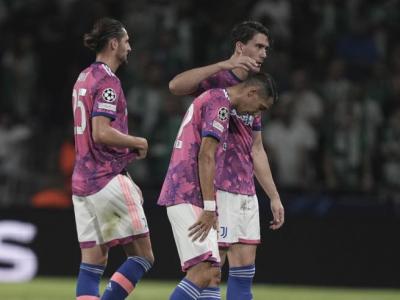 Ángel di María is escorted off the pitch by teammates Dušan Vlahović and Adrien Rabiot
HAIFA – Juventus lost by two goals in an away match on Tuesday night against Israeli team Maccabi Haifa.  The 2 – 0 defeat means progression to the round of 16 is unlikely for the Torinese club, as they must now beat Portuguese league leaders Benfica and group favourites Paris Saint-Germain.
Although Juventus dominated possession of the ball, Haifa took more shots than their opponents and made better use of their chances.   The first of these to be converted was a glancing header from Omer Atzili in the 7th minute following a well-placed cross by Pierre Cornud.  Play continued to go against the visitors; Tjaronn Chery almost doubled the Haifa lead when his freekick struck the crossbar and Juventus star-player Ángel di María was subbed off with an apparent hamstring injury. Atzili then scored a second goal, curling the ball into the top corner at the near post three minutes before half-time.  In the second half Juventus put more pressure on Haifa, but some strong saves from goalkeeper Josh Cohen preserved the clean sheet.
Juventus have an impressive record in the Champions League, reaching the final twice in the past decade.  Exiting the competition in the group stage would constitute their worst performance for eight years.  Tuesday night's upset follows a loss on Saturday to Serie A champions A.C. Milan, and the Bianconeri manager Massimiliano Allegri is now under increasing scrutiny, with many calling for his dismissal.  Yet the owner of the club, Andrea Agnelli, rejected the idea that any one person is at fault, explaining that the recent poor performances are a “group problem” in an interview with Sky.
Part of the current issue is that Allegri has been unable to field his best squad due to injuries.  Rising talent Federico Chiesa has been side-lined for nine months after he ruptured his anterior cruciate ligament in a match against Roma while returning midfielder Paul Pogba suffered a training injury in July and is not expected to play until next year.  Nonetheless, Juventus have spent €105m on players so far this season, compared to the €2.4m expenditure of Maccabi Haifa.
jp-es
Sport