Italy’s next Government will remain a steadfast Western ally in the Ukraine crisis says Polish Ambassador, HE Anna Maria Anders 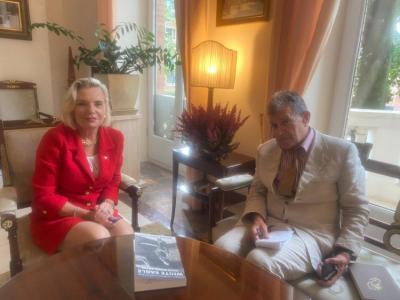 According to the Polish envoy, Pro-Russian tendencies of partners will not sway FDI leader Giorgia Meloni

ROME -- Poland expects the good relations with Rome to continue after Brothers of Italy leader Giorgia Meloni forms her anticipated new Italian Government. The Russian issue and support for the Ukraine will remain the key elements of the dialogue between Poland and Italy, says the Polish Ambassador, H.E. Anna Maria Anders, speaking in an exclusive interview with the Italian Insider.

“Giorgia Meloni has been very adamant in her support for the Ukraine so, at this moment in time, I have no doubt that is what she means. The Polish government is very positively inclined on this. We look forward to collaborating and I would say we have no reason to doubt that this particular government is going to branch off and decide not to go along with everybody else. We are facing the same challenges. This winter is going to be tough. We already see a huge increase in energy prices which will affect all the EU countries. The question is how it is going to be resolved. I strongly believe we need to remain united in solidarity.” - Ms Anders, daughter of Gen. Wladyslaw Anders, one of Poland’s greatest war heroes, said in an interview at the Polish Embassy.

Ms Anders added that the confidence she places in the Brothers of Italy leader is also based on meeting the politician.

“I had the honor of meeting Giorgia Meloni personally. No doubt Poland shares the common values such as the significant role of family and Christian identity, but I must admit I would like her even if we did not share any political ties at all.”

Asked whether she is not concerned about the roots of the FDI in nostalgia for fascism (which the Ambassador’s father fought to defeat with the Polish 2nd Corps and the Allies in Italy during the Second World War), Ms Anders replied:

“Actually I am not very concerned. I don’t believe this is the path that Giorgia Meloni will take today. She is an Italian who is proud of Italy. Sometimes I feel she is being demonized in much the same way as changes of government in Poland have been misconstrued” the Ambassador avows. “I’m not concerned with what she has said in the past. I am focused on what she is going to do in future. I feel we should move forward and time will tell.”

Since the outbreak of the war almost 6.5 million Ukrainian people have crossed the Polish-Ukrainian border. Between 1.5 million and 2 million have decided to stay in Poland.

“Even before the war we had over 1 million Ukrainians in Poland, who integrated very well. We share with the Ukrainians not only similar languages but also similar cultural DNA, therefore Polish society has shown great empathy towards Ukrainian refugees. I welcome the fact that this Polish solidarity has also been noticed in Italy.”

“There is no doubt that there is a huge amount of similarity between the year 1939 and what we see now with the Russian invasion and the refugee crisis. Many European governments have noted that Poland’s recent warnings about Russian expansionism turned out to be prescient”, the Ambassador notes.

“Before the invasion, people were calling Poland and other Eastern European countries hysterical. They were saying that there is nothing to fear, that nothing was going to happen but it turned out our warnings were well-founded. In fact the situation is deteriorating with the Russian illegal referendum and the attacks on critical infrastructure in the Baltic Sea.”

What is important is that we need to avoid any kind of appeasement policy. This is not the way to go. In theory Poland and Eastern European countries had peace after World War II, but it was peace under the Soviet government. Is this what we want for Ukraine? In return for giving a piece of land that Russia wants? No, because in two or three years time Putin can turn around and say ‘ok, I have changed my mind and I want more now’. It is crucial that any kind of solution to the current situation needs to be accepted by Ukraine.”

As Ambassador Anders sees it, the new Italian Government will most likely maintain the traditionally warm relations between Poland and Italy that go back to when patriots from the two countries coordinated their battles for freedom from Austria.

Historically we go way back to the XIX century, the Polish National Anthem mentions Italy and the Italian National Anthem mentions Poland. There is also the history of the Second World War. The Polish II Corps under the command of General Anders, my father, liberated Italian cities from Nazi Germany. The role of Polish troops is particularly remembered in regions such as Lazio around Cassino and in the Marche,  Bologna and Ancona. The strong connections go way back but are also felt today. The Polish community in Italy numbers around 130,000 people (mostly women) and remains extremely active. They promote Polish history and culture. Our Embassy works very closely with them.”

“It is also very important for us to continue developing trade relations between our countries. Those always have been good, but in the last year we have done much to enhance them even more. We organized a country presentation in Rome this year in which many major players from Poland participated. Major areas of Polish excellence of interest to Italy are green technologies, pharmaceuticals, medical equipment, aviation and space technologies. Moreover, Italy’s Minister of Education signed an agreement with the University of Sapienza on research cooperation and the Polish Minister of Health came to Italy to discuss solutions to the Covid pandemic. Therefore, our relations from that point of view are extremely good. If I had to suggest one thing that would make things even better is that  we really do need our national airlines to offer a direct flight connection between Warsaw and Rome because strangely we do not have one. This is something we are working on.”

While civil air links may be inadequate, Poland and Italy have developed strong ties in military aviation with Poland recently signing important contracts with the Italian defence concern Leonardo to acquire helicopter gunships and jet trainer aircraft. There also has been speculation over the possibility of more Italian forces being deployed in Poland in response to the situation in Ukraine.

As the Ambassador said, in that case “It would depend on the Italian government and the NATO alliance. We do have a good working relationship with Leonardo, whose helicopter company is located in Poland in the town of Świdnik. We have been a major costumer of military equipment produced by Leonardo in recent years -- the W149 helicopter and the M-346 advanced jet trainer aircraft as you know. Poland appreciates Italy for its involvement in guarding NATO’s Eastern flank. At the same time we have a Polish contingent based in Sigonella, Sicily. I have visited them several times. This is an example of the cooperation between NATO allies and a proof of solidarity. The Italian Air Force is currently present at the 22nd tactical Air Base in Malbork, as part of the NATO Baltic Air Policing mission securing the airspace of Eastern countries. This is the first time that Italian aircraft have performed operations from the Polish territory. Being the daughter of a General, the widow of a Colonel and the mother of a Captain in the US army, I follow with great interest all the aspects of our defence cooperation.”

Cultural exchanges between Poland and Italy are strongly rooted historically and are increasingly thriving  as the two countries emerge from the impact of Covid.

"Two weeks ago one the brightest Italian musical conductors Alvise Casellati had an excellent concert together with the Cracow Philharmonic. This is a great example of Polish-Italian cultural exchange. We are hoping to have another concert soon here in Rome, a concert for peace with the participation of Poland, Italy, Israel and Ukraine. Cultural diplomacy is one of our priorities. Our Polish Institute of Culture here in Rome remains very active. We organize art and historical exhibitions, movie screenings. This year, the famous Polish Śląsk Song and Dance Ensemble performed a beautiful concert at Basilica Sant'Andrea della Valle. They sang both Polish and Italian songs. And it was amazing how many Italian people came to watch it.”

Each year the Ambassador attends the Commemoration ceremony marking the Battle of Monte Cassino, held at the Polish cemetery where her father lies buried with his soldiers who died fighting during the epic conflict. Now she is preparing for the 80th Anniversary in 2024.

“In two years, in 2024 we have the 80th anniversary of the Battle of Monte Cassino. At the 75th anniversary, in 2019, we had President Duda and President Matarella and it was the first time our Presidents met for this very occasion. For me personally it was an amazing experience. There were about 5000 people present, including many young scouts from Poland. So, I expect, indeed hope, it will be the same in 2024. I believe it is very important to cherish the memory of the Polish soldiers fighting for the liberation not only of Poland but the whole Europe .  As we look at the sacrifices made now by the Ukrainians and by everybody else I think it’s going to make us even more aware of the sacrifices made by the Allied forces in the Second World War.”

Ms Anders declines to be drawn much into a question we asked about the continuing speculation about the mysterious death of the other great Polish World War II leader, Gen. Sikorski, and the wider question of ways in which Britain may have let down Poland at the time.

“I will answer one of the part of that,” she said. “I do not want to go back to the death of General Sikorski, because I suspect, as with the death of Princess Diana, we will never learn the truth.”

“But in 1946 when the British Government had a victory parade in London, the Polish contingent was not invited, because there was reluctance to upset the Soviet Union. But in the past few years I believe that the British government has tried to make up for that. This year, I will march with (Polish) veterans in the Remembrance Parade in London. It is important to me, it is important to the veterans to make up for what they lost then. There has been also a huge emphasis on the part the Polish pilots played in the Battle of Britain. In the last few years there have been at least two films made on that. And I think it is very important that their role is being recognized”.

Ms Anders concluded the interview by reflecting on why Poles love Italians so much.

“I think we have a similar temperament. Our people love to have a good time, Poles love the Italian food, wine and climate. Of course we also invite Italians to visit Poland which has changed so much in the recent years and is constantly becoming more beautiful. Italians particularly love Cracow. I have heard it said that if Rome didn’t exist then probably Cracow would doubtless be one of the most beautiful cities in the world. Italians love also Chopin. Finally we cannot forget our common devotion to the memory of the Polish Pope, John Paul II which truly bonds our both nations." 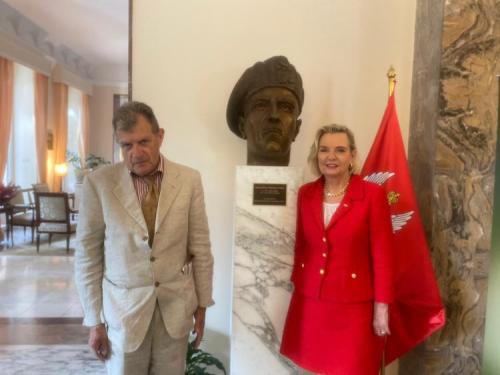