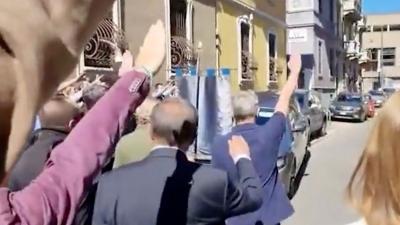 ROME – An investigation has been opened into a fascist salute allegedly made by a member of the political party that may produce Italy’s first female prime minister, judicial sources said on Thursday.

Brothers of Italy (FdI) Lombardy councillor Roman La Russa made the straight-armed gesture at the Sept. 19 funeral of his brother-in-law Alberto Stabilini.

Milan’s public prosecutor opened the “exploratory” probe after a video of the incident went viral.

Calls are mounting for Giorgia Meloni, the head of La Russa’s party (FdI) as well as Lombardy Governor Attilio Fontana of the League party, to reprimand him.

Earlier in the week, Calogero Pisano, a Brothers of Italy co-ordinator in Agrigento, Sicily, was suspended after La Repubblica newspaper published social media comments he had posted in 2014 referring to Hitler as a “great statesman.”

The newspaper also found posts in 2016 referring to party leader Giorgia Meloni as a “modern fascist.”

Pisano was “relieved of any party post, starting from that of provincial coordinator of Agrigento and member of the National Direction,” Brothers of Italy said in a statement.

“From this moment on, Pisano no longer represents FdI at any level and is also prevented from using the symbol.”

Pisano responded on Facebook apologizing “to anyone who has felt offended by the posts that, after many years, I consider shameful.”

“Years ago, I wrote things that were deeply wrong,” he posted. “I had deleted my personal Facebook profile because I was ashamed of the things I had wrongly published.”