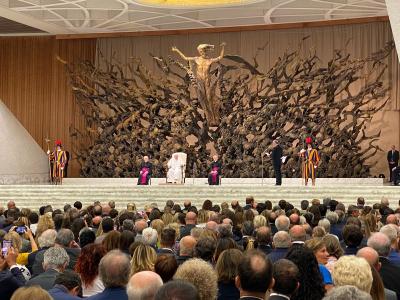 Pope Francis and Paolo Bonomi at the audience, Photo: Confindustria

VATICAN CITY - The general public assembly of Confindustria, the association that brings together the majority of Italian companies, was held on 12 September for the first time in an unusual venue, in the Paul VI Hall of the Vatican City: in fact, on non-Italian territory. The uniqueness of the event was also marked by the fact that Pope Francis himself spoke after President Paolo Bonomi's speech, almost in dialogue with him and the entire business community.

"In this Italy of ours, we feel, today more than ever, the duty to offer our contribution centered on the shared definition of a worthy job. Rooted in the original dignity of every woman and man, irrepressible and unavailable to any power or ideology. If we forget this foundation, the laws of the economy betray their innermost meaning and value'. This is one of the most significant passages of the speech by the President of Confindustria, Carlo Bonomi, in front of over 5000 entrepreneurs who, together with their families, were present in the Aula Nervi for the Holy Father's Audience to the Assembly of Industrialists.

‘An 'extraordinary event. A decision taken months ago, when we would not have imagined that it would be held just a few days before the political elections,' said Bonomi, recalling the priorities for entrepreneurs and at the same time reiterating the commitments that the business system is ready to make to the country.

The thread running through Bonomi's speech was work, a work that must, however, have its own social and economic dignity and be carried out in safe conditions. Bonomi then drew attention to the importance of workers over the age of 60, whose dignity 'is not protected by early retirement, but by continuing to offer them tasks consistent with the experience they have gained and which they can actively transfer,' he urged, calling for a halt to a new season of early retirements, focusing instead on active employment policies. Bonomi dealt with the most pressing times in the background of Italian society and Confindustria's contributions and proposals for their management, first and foremost the serious energy crisis that threatens to bring the country's entire production sector to its knees. Therefore, the cap on the price of gas, on which negotiations are being laboriously conducted at European level, is a good thing, even if the measure risks not being decisive. "The problem is not only energy, there is also the high price of raw materials, and so far we are not intervening with structural measures but only cyclical ones," Bonomi said. More generally, according to the President, it is the entire country that needs to change step, starting with the political class whose horizons seem to be 'shorter and shorter and crushed on false priorities', while there is 'more than ever the need for long-term projects, as the only way to respond to the dramatic problems of Italian society,' he added. "We dream of a united country. From the Covid to the war in Ukraine, in each of these terrible trials, in which companies and hundreds of thousands of jobs have been, and remain, at risk, the beacon that has guided us has always been to think first and foremost about how to defend - all together - the work, growth and social cohesion of the entire country,' Bonomi said, recalling the importance of companies in times of crisis and thanking the entire Confindustria system for having proved to be one of the essential forces holding Italy up in the world. ‘This is the great collective heritage that, thanks to everyone's commitment, we offer to Italy'. He did not forget the problems of getting young people into work and spoke of 'a lost, divided, unjust country' in which 'values and a vision that knows how to

In turn, the Pope urged entrepreneurs to pay attention to the ethical and social, and not only financial, aspects of their activities, with a special emphasis on young people, women and migrants. "Another way of sharing is the creation of work for all, especially for young people," denouncing the many cases of women who lose their jobs when they become pregnant. In his lengthy address to the almost 5,000 people present, widely reported by the Italian and foreign media, the Pope reiterated his 'no' against 'every form of exploitation of people and neglect of their safety', especially of migrants. The Pope cited Alberto Balocco and Adriano Olivetti as examples of "good entrepreneurs", asking all others not to lose "contact" with the life of factories and workshops, that is, not to lose "the smell" of work. On the wage gap, the Pontiff noted that 'if the gap is too high, work gets sick and society gets sick too'.

In the long press conference following the Pope and Bonomi's speeches, the latter expanded with Italian and foreign journalists on the topics addressed in the morning: energy, the political and international crisis, the pandemic, the economic and financial outlook for the country and its companies. In particular, responding to a question from the Finnish correspondent on the difficult issue of the decision by the Finnish multinational Wärtsilä to transfer its Trieste plants to Finland. he said that, according to the regional Confindustria (Confederation of Italian Industry), it is formally a decision that does not conflict with Italian laws, but that a different method could have been used, emphasizing that this type of crisis also occurs due to the lack of attractiveness that Italy offers to foreign investors, also expressing perplexity: 'It is not with a law that one can think of solving the problem of Wärtsilä, but by making production in one's own country attractive, as the Finnish government has done. 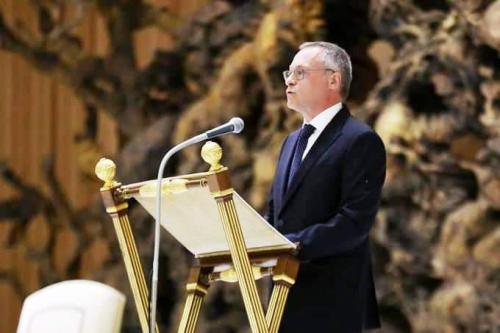