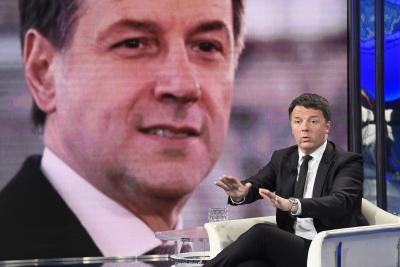 ROME – The final days of campaigning in the lead up to Italy’s Sept. 25 snap election have disintegrated into unseemly name calling between two former Italian prime ministers.

Exactly one week from the polls and Italia Viva (IV) leader Matteo Renzi, who served as Italian Prime Minister from 2014 to 2016, described President of the Five Star Movement (M5S), Giuseppe Conte, as a “half man” who employs threatening "mafia" language. He said it’s “shameful” that the law professor is using the ‘citizenship income’ to ingratiate himself with voters in the south.

"Renzi talks of the shame of the citizenship income but if he were to speak of the shame that he, as a senator, gets 500 euros a day ... let's not kid around,” Conte said. “He is not ashamed that he got paid by the Arabs and promoted the Saudi renaissance.”

"Renzi, come without security detail to talk to the citizens and express your ideas. Say that in Italy a social protection system is not needed. Come and say it and don't hide."

Renzi struck back by accusing the M5S President of praising violence.

"You should be ashamed Giuseppe Conte thinking that someone could beat me up. This attitude that exalts violence is incredible,” he said.

“Conte you’re a half man. Have the courage to have a civilized exchange. This is the language of the political mafia.”

It’s no secret that there’s no love lost between the two former prime ministers given Renzi plunged the nation into political chaos after pulling his centrist party out of the Conte II government in January 2021. Erupting over Covid spending, the crisis led to Conte’s resignation.

Weighing in on the issue was leader of Italy’s far-right League party, Matteo Salvini, who served as Deputy Prime Minister and Interior Minister during Conte’s first government.

“It’s frustrating to see the insults between Conte and Renzi,” Salvini said. “If Mr Conte really did say ‘come here without security guards, let’s talk and see what happens to you,’ this was done during middle school after losing a soccer match. It doesn’t seem to me like a reasonable way to converse.”

But Renzi continued the tirade by likening Conte’s language to that of former American President Donald Trump.

“Never in republican history has it happened that Berlusconi told Prodi to come to the streets without body guards and we’ll show you,” Renzi said. “It’s Trump’s language, harmful to institutions. Conte is inciting violence and verbal hatred. I have dozens of death threats on the phone from people who say ‘I’ll see you tomorrow in Palermo,’” he said. “If something happens in the streets [Sept. 18], I’ll consider Mr Giuseppe Conte the instigator and morally responsible. There is a Trumpian slant in Conte, calling to mind Capitol Hill.”