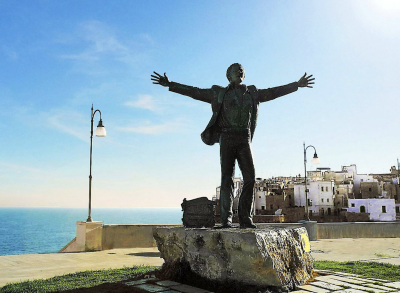 POLIGNANO - Renown for its timeless Mediterranean sceneries, this Apulian seaside resort and former ancient Greek colony has enjoyed extensive international success as of late. The small town was successfully relaunched from a relative unknown into a famous touristic hotspot with continuous efforts. The other day, however, Polignano staged a night climaxing the summer that would offer locals the opportunity to extoll the genius of their community. It aim? Emphasizing the stringent relationship of paternity over an important cultural contribution delivered to Italy and the world proper. Polignano crowns its latest successes by exalting itself in the celebration of one of its most prominent voices, and characterizing expressive forms - the music of Domenico Modugno.

An annually celebrated occurrence, the town hosts this year's edition of the Meraviglioso Modugno Festival. Several renowned artists gather to perform some of Modugno's most popular songs with orchestral accompaniment in front of a crowded waterfront.

On a stage engulfed by the sudden spell of mist each artist enstages his respective piece. Giuliano Sangiorgi, inextricably linked with Modugno after his famous rendition of Meraviglioso, Malika Ayane with Dio come ti amo, Gaia with Nel blu dipinto di blu, Sangiovanni with Piove, Tosca with Vecchio Frak and Lu Tambureddu, Zen Circus with Amara Terra Mia, Enrico Ruggeri with Stasera pago io and Notte di Luna Calante, and finally La Municipàl with L’avventura and Malarazza, all performed that night to pay homage to the great singer-songwriter.

Born in Polignano in 1928, Domenico Modugno is considered the first Italian cantautore and one of the most prolific artists in general. He has written and recorded some 230 songs, starred in 38 films for the cinema, and seven for television, as well as 13 theatre performances and several television programmes he hosted. He is among the Italian artists who have sold the most records, with over 70 million copies.

He also won four Sanremo Festivals, the first of which, in 1958, with the song Nel blu dipinto di blu (of which he was also the author, making him the first songwriter in the competition in the history of the event), also universally known as "Volare", destined to become one of Italy's best-known songs, and from which he derived his nickname Mr Volare.

Zen Circus presents a fever-dream interpretation of "Amara Terra Mia" (My Bitter Land). In a rendition which only furthers the impression of desolation already inscribed in its lyrics and sombre guitar chords.

Domenico sought to construct a collective imaginary which would convincingly encompass the many contradictions of which his land is interwoven.

He achingly recalls images of an earlier life, fashioned along archaic lines of existence. A pair of hands wrestling vigorously with a rope drenched in seawater, searing the palms as it resists or the meagre figure of a mother nurturing her babe attentively in a faded doorway. He points at the starved soul of his beloved land, moribund, desiccated, folded upon itself, bereft of hope. The old country like porcelain, is as beautiful on the outside, as it is hollow in the inside.

The tender, careful description of its evocative sceneries. Those flakey cliffs, framed in pastel blue water. The arid landscape, with its rolling dunes, the moon glimmering through the withered branches of solitary olive trees, the desolate inroads leading nowhere, the wooden faces of the elderly, their calloused and rugged hands.

The south forsook in its structural incapacity to adapt to the new set of values posited by a giant newcomer, the long-awaited 21st century, its future.

The ensuing collapse of rural communities driven by the encroaching necessities of consumer society, the inevitable deracination proceeding henceforth, and the impending exile looming over the lives of those inhabiting the province.

"Amara Terra Mia" is, first and foremost, a song of mourning. It embodies the fatalistic outlook of those lined up for departure, the impotence in the face of fate. The same feeling that must have gripped the artist's fellow countrymen leading up to the dramatic Italian diaspora to the new world.

The evolving Industry, at this point, still retains a somewhat barbaric element. Many economic migrants were drawn by the magnetic pull of the metropolis. Luring with the promise of a better, more comfortable life, the city ensnares its helpless victims in a cluster of industrial machines, only seeking to replenish its infinite ranks of workers. Reducing man to his mere productive performance, he becomes one with the quotas that can be painfully extracted from him. He is worked into a pulp by the gruelling work shifts, fed into the machines like true factory fodder. Once worn out, his utility exhausted, he is amassed in the scrapyard of history just like a broken toy. A fate depicted in the jarringly abrasive portrayal of factory work in Elio Petri's The Working Class Goes to Heaven.

"La Malarazza" (The Wicked Breed), performed by the Municipàl, offers a behavioural model oppiste to submission . A slave dispossessed of all his belongings by his master, prays the cross for a miraculous liberation. You want justice? - cries the Christ atop of his scaffold - Enough whining, promote it yourself!

"La Malarazza" presents a modern message of justice; political and thoroughly secularized. The meek must confront modernity head-on; personal rights are set against the impersonal necessities of profit. The dispensation of justice cannot be postponed to an otherworldly tribunal, which in transcending earthly injustices, only consecrates them. Responsibility for the resolution of social questions should be delegated directly to society itself and its concerned parties. Rights are earned through struggle, strikes and contestations. A combative attitude that perhaps prefigures the artist's later political involvement as a member of parliament.

"L'Avventura", also performed by La Municipal, illustrates an alternative to modernity, eluding its troubled dichtomy; the dialectical relationship between submission and defiance; progress and resistance.

Modugno points to the path that ushers into the woods, the hidden mountain trails, and the shores of the sea. He advocates for a bold life-affirming vitalism, bent on overcoming new challenges, on stimulating self-growth, on conquering new distances and uncovering new horizons.

This indefinite optimism resides in the will, in the certainty of weathering the many trials and crises involved in traversing the threshold of an unknown world. L'Uomo in Frak (Man in Frak) is its life-negating counterpart; the imperturbability in the face of death, in crossing the line of that last meridian, elegantly treated by Domenico Modugno with the tip of the fork.

"L'Avventura" does not oppose a pre-established order of values, resisting one or more of its points, but rather, it constructs an entirely different scale of values. To the prevailing norms of capitalism, i.e. efficiency, profit, and productivity, the hero of "L'Avventura" declares the supreme value of freedom as a condition and a goal.

Like the archetypal heroic parables of old, Scaramuccia, reminiscent of a wandering minstrel, ventures forth from the world of common day, his hair dishevelled, his broad chest swelled with song, with nothing but a guitar and a horse. He enters a region of supernatural wonder: fabulous forces and brigands are there encountered, and a decisive victory is won: the hero comes back from this mysterious adventure with the power to bestow boons on his fellow man.