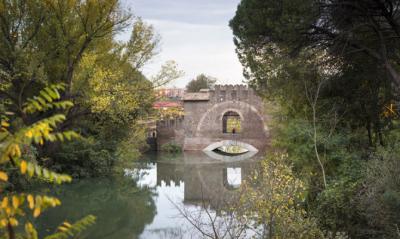 VALLE DELL’ANIENE - Sinuous is the path winding from the source of the Aniene river, leading to Rome. On each bend, treasures of history and art can be found, little known even to Romans.

The beauty and above all wealth of the Eternal City has always overshadowed the wonders that lie one hour from the capital. Just think of the Laghetti di San Benedetto, under the Sacro Speco of the Subiaco abbey: a sacred and profane mix. Here St. Benedict loved to pray and meditate. Defined as "the Caribbean a stone's throw away from Rome," the area has become a destination for weekend tourism. Though this is a rediscovery: the Aniene Valley has always been a strong destination due to its great imperial villas. From Hadrian’s Tivoli to Nero in Subiaco, to the one attributed to the poet Orazio a License, who by using the flow of the river, created a dense network of swimming pools and baths. Residence of great Roman families: the Massimo castle in Arsoli; the Orsini have left various traces here, such as the Bandusia spring in License, or the votive temple of San Giacomo Maggiore, a unique example of Renaissance Gothic architecture in Vicovaro; the Rocca dei Borgia di Subiaco was the birthplace of Lucrezia and Cesare, Valentino, the Macchiavellian prince, later home to the powerful Colonna; in the castle of Mandela, currently owned by the Marquises del Gallo of Roccagiovine, lived Pope Pius VI and Giulia Bonaparte, cousin of Napoleon III. The Aniene Valley was also chosen as a stop on the Grand Tour by artists and intellectuals of the European intelligentsia: Van Wittel, the Italianized Vanvitelli fell in love with the wild beauty of these places (and left us several memories with his views). The village of Anticoli Corrado is known as the "Country of artists and models" for the Mediterranean beauty of the commoners who lived in the village. Here, Saint Benedict elaborated his Rule, “Ora et Labora,” perhaps thanks to the slow flow of the river that provides a kind of serenity. Last but not least, Ennio Morricone settled in Cervara di Roma, and many glimpses of his westerns can be recognised in the forests of the Simbruini Mountains, where he shot his films, without moving from his cabin.

Each village with a typical dish

The beauty and uniqueness of the medieval villages of the Aniene Valley is reflected in the diversity of their typical dishes. It is said that the strozzapreti were born in the religious town of Subiaco, where the Sacro Speco di San Benedetto and the majestic abbey of Santa Scolastica are located. Perhaps the housewives did not particularly like the power of spirits and of the abbots, so much so that it is said that they made this pasta with the hopes that the visiting priests would choke. According to other historians, the name is directly linked to their goodness. "So good that you could choke." Also, from sublacense cuisine, are the baked beans and "Ju Pappaciuccu," served with "yellow pizza" or maize flour, a very frugal dish, Benedictine style, based on boiled black cabbage, drained and mixed with chunks of stale corn pizza and homemade bread.

Typical of Vicovaro is handmade pasta with spelt flour of “poor” origin, every day, as opposed to the "rich" one on Sunday, with eggs.  In Percile “tisichelle” are typical in the cuisine, dry biscuits, soaked from the Christmas period, as well as ramiccia, a pasta of thin hand-made fettuccine, no more than 2 mm wide and made with lots of eggs, and perfect with mutton sauce. A festival, dedicated to this dish, takes place on December 6. At Anticoli Corrado we find another first course, the cazzarejji, pasta made from wheat and maize flour seasoned with tomato and a very abundant quantity of garlic, which perhaps gives the preparation its funny name, because those who taste them can only curse. In Vallinfreda, we find gnocchingati, or gnocchi with beans and pork rinds, frascareji, a typical handmade egg pasta and sweet donuts with wine. Arsoli is famous, and proud, for its bean, to which it has dedicated an entire part of a widespread village dedicated to ancient crafts and to the preparation of this Slow Food presidium: you can walk and "touch" as you once lived, with many costumed actors. And if fasting was considered synonymous with spirituality and mysticism, so much so that the monks used to eat only one meal on weekdays and two on holidays, surely the inhabitants of these places did not respect "the rule."

A woman of spirits, it is said that the beautiful Lucrezia Borgia had a great passion for food, so much so that she would have expressed the desire, if her life had not been destined for a very different fate, as a cook. In the heart of the medieval village of Subiaco stands the Rocca dei Borgia. Inside this impregnable military fortress, which then passed into the hands of the wealthy Colonna family and where the first movable type book in Italy with special characters coined right here was printed, Lucrezia loved to have beans prepared for the escaped bird, his favourite dish. Even Artusi mentions it in his recipe 384 with the title "Beans in the guise of birds." Though this was a way of making fun of the simple dish that only contains beans seasoned with oil, garlic, tomato, salt, pepper, and sage. Her other favourite dish was the eel-stuffed peacock. And when the beautiful Lucrezia arrived in Ferrara it is said that a chef from Bologna, master Zefirano, created a pasta specially for her inspired by that long blonde hair that bewitched the kings and lords of the time: perhaps this is how her tagliatelle were born. The idea was so successful that during the wedding banquet of Lucrezia and Alfonso d'Este this pasta with germano sauce was served.

Advice on where to eat and sleep

La Panarda is a destination for meat lovers in the shadow of the Rocca dei Borgia, in the centre of Subiaco. Here, for three generations, the butchery of the Rampone family has warmed the souls of pilgrims on their way to the Sacro Speco. At La Cucina di Rio, in Riofreddo, you can taste the dishes of the Lazio peasant tradition that mix with those of the nearby Abruzzo. At the table, the jokes of the "cheffa" Lidia cheer the convivial banquets. Try the mixed starter of the house, the sagnozzi with lamb and lemon sauce, the persechelle with truffles and the sheep stew with potatoes.

L'Oasi Francescana in Vicovaro is a unique spot. Here you can try the experience of sleeping in an old Franciscan abbey, left almost intact in its simplicity of the furnishings. Built over the caves where San Benedetto retired for years before moving to Subiaco, during the elaboration of his “Ora et Labora”. Here you can also book guided tours to the Roman aqueducts of Acqua Claudia and Acqua Marcia, with a view overlooking the river Aniene. At the Foresteria of the Monastery of Santa Scolastica in Subiaco, you can try a real immersive experience with a view of the surrounding valley, from the imposing monastery of Santa Scolastica, here you can also buy some products made by the monks who still live in the monastery.