New Quorum Election Poll: Brothers of Italy is the only party not to register a loss in the right 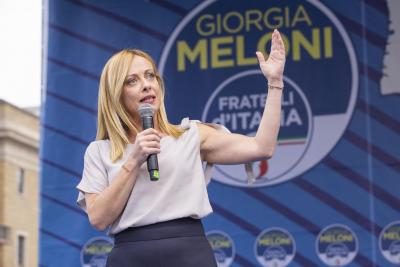 Brothers of Italy's leader Giorgia Meloni during a public rally

ROME - Data presented by a new election survey, Quorum/YouTrend for SkyTg24, places Giorgia Meloni's Brothers of Italy (FdI) in the lead, with a stable 24%, the Democratic Party (PD) and the League (Lega) both recoil, Five Star Movement (M5S) goes full steam, in Italy's upcoming general elections, September 25. According to the survey produced by the Turin-based institute, the share of undecided and abstaining registered electors (which are calculated together) has also increased in the last week.

The centre-right coalition, down to 47.3 per cent, has lost a point and a half since last week's poll. Despite landing the role as the leading political force in Italy, FdI's growing popularity is insufficient to offset the losses registered in the field by its coalition counterparts. The League (Lega), down by 0.3 per cent, resists at 13.5 per cent, pressed by the ascending M5S. Below the ten per cent threshold, Forza Italia (FI) dips to 8.1 per cent, with a sharp loss of 0.6 per cent. The timid list of centrists, Noi Moderati, settled at 1.5per cent losing a share of 0.4 per cent, according to Quorum.

The centre-left suffers a similar fate. One point squandered lands it at 28.5 per cent. As a result of these voting intentions, therefore, the centre-right can afford the luxury of losing a point and a half in a week (all the responsibility of the League, Forza Italia, Noi Moderati) without forfeiting its supremacy: the centre-left, in turn, loses a point and remains some 20 points behind.

Each member of the centre-left coalition is plunged into an energy-sapping struggle against a storm of no confidence. The PD, at a loss of 0.8 per cent in a week, restabilises at 21.9 per cent, its position as the second party in popularity safely secured nevertheless.

Quite the contrary for the League's third-place standing, jeopardised as it is, less than three weeks before elections, by the M5S' surge in popularity, rising by a net point in only seven days, amassing a total of 12.1 per cent. Behind the curve, Carlo Calenda's Action (Azione) and Matteo Renzi's Italia Viva (IV) continue to stay afloat slightly above 5 per cent.

Then there are some who fight along the three per cent line of closure, before which the allocation of seats in Parliament is precluded. In the centre-left field, the Left (la Sinistra) - Green (Verdi) alliance could push through, catching its breath in the last week (+0.3 per cent) to a 3.5 per cent. Less encouraging scenario for +Europa, stripped of 0.7 per cent, folding into itself at 2.2 per cent. A faint hint of reaction from the data concerning Luigi Di Maio and Bruno Tabacci's Civic Engagement (Impegno Civico); ultimately, it fails to deliver - the 1 per cent threshold left uncrossed.

Outside the coalitions, Gianluigi Paragone's Italexit, slightly up at 2.6, continues to chase the threshold necessary to enter Parliament. The same feat is incomparably more complicated for Luigi De Magistris' Unione Popolare 1.2 per cent.

A final passage on the Quorum/YouTrend poll concerns trust in political leaders. In the lead remains President of the Republic Sergio Mattarella (61 per cent) and Prime Minister Mario Draghi (54 per cent). The first party leader is Giorgia Meloni, with 39 per cent of positive judgements, followed by Giuseppe Conte with 34 per cent. Following - perhaps surprisingly, one might say - is Silvio Berlusconi, who beats both Matteo Salvini and Enrico Letta, to whom the leadership of the Pd is entrusted. The Pd's secretary cannot be said to enjoy high public esteem at the moment; he is also overtaken by Emma Bonino. 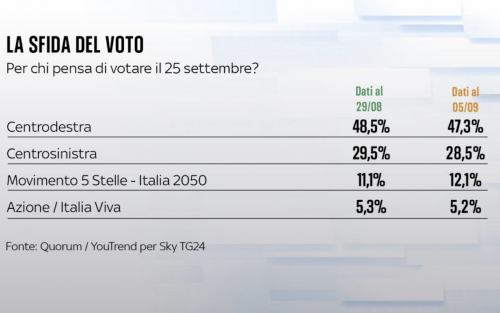