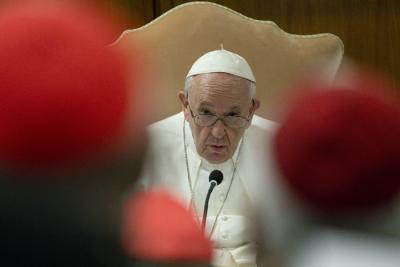 The Vatican said that Francis had been “clear and unequivocal in condemning it as morally unjust, unacceptable, barbaric and senseless.”

VATICAN CITY – The Vatican has clarified remarks by Pope Francis after the death of a Russian activist which he described as a “poor innocent girl” during his general address last week.

After the pontiff’s comments caused controversy among Ukrainians, the Vatican issued a statement Tuesday saying that his words should be interpreted as “a voice raised in the defence of a human life and the values attached to it and not as a political statement.”

The Vatican added that Francis had been “clear and unequivocal in condemning it as morally unjust, unacceptable, barbaric and senseless.”

The Holy See went on to say the pope’s comments on the Ukrainian war “are mostly aimed at inviting pastors and the faithful to prayer, and all people of good will to solidarity and efforts to rebuild peace” though they acknowledged that this specific incident had led to “public discussions … about the political significance attached to such interventions.”

In his customary Wednesday audience last week, the pontiff said that “war is madness” and that “so many innocent people are paying for the madness on all sides.”

In an unusually direct reference, the pontiff said “I am thinking about the poor girl blown up by a bomb under the seat of a car in Moscow. The innocent ones are paying for the war.”

His comments came after 29-year-old Darya Dugina was killed by a car bomb last week that evidently was meant for her father, Aleksandr Dugin, an ultranationalist philosopher with ties to Vladimir Putin.

Dugina served as her father’s press secretary and appeared on Russian state TV in defence of her countries invasion of Ukraine.

The incident sparked diplomatic tensions with the Ukrainian ambassador to the Holy See Andrii Yurash describing Francis’ comments as “disappointing.”

Francis has previously expressed his desire to make a papal visit to Ukraine and Russian to promote peace later this year.