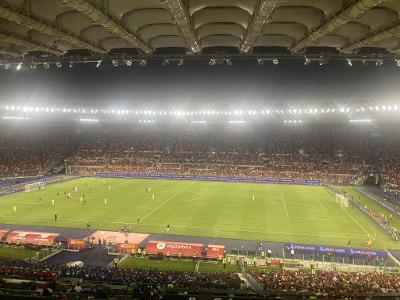 ROME – A first half brace from Paulo Dybala and a goal from Roger Ibañez da Silva helped ease Roma to a 3-0 victory against Monza at the Stadio Olimpico.

Dybala scored his first two goals for the club in a fifteen minute spell midway through the first half while Ibañez da Silva headed in a second half corner in a comfortable Roma win.

Roma started the brighter of the two sides and had the game’s first chance within the opening three minutes. A long kick out from Rui Patricio was flicked on by Tammy Abraham to strike partner Dybala who in turn played the ball out wide to the right wing, although the ball eventually went out for a corner which didn’t come to anything.

The home side did soon take the lead with 17 minutes played as Dybala scored his maiden goal for the Giallorossi. The Argentinian latched onto a flick on from Abraham and went through one on one, where he made no mistake against Michele Di Gregorio to open the scoring.

Roma were by far the more dominant side in the first half and some good combination play allowed Abraham to race in on goal, although his shot was dealt with by Di Gregorio.

With just over half an hour played Dybala added his second of the evening. Again, Abraham was involved as his shot from inside the box was initially saved by Di Gregorio, however Dybala then pounced on the loose ball to stab home a second from close range.

With the half time whistle looming Dybala nearly turned provide as he squared the ball for Lorenzo Pellegrini but the Italian’s attempt cleared the crossbar.

In injury time Gianluca Caprari went for the spectacular with a bicycle kick attempt but the Monza forward failed to make contact to allow the home side to take a two goal cushion into the break.

After the restart, the game continued in the same vein with Roma controlling possession and dictating play.

Dybala could have got a hattrick just a minute into the second half but his shot was straight at Di Gregorio.

Soon after Abraham then showed magical feet to weave inbehind the Monza backline but was just unable to take the ball round the goalkeeper and the ball broke away for a corner.

Roma added a third on the hour mark through Roger Ibañez. Pellegrini delivered an enticing in swinging corner and the Brazilian defender climbed highest at the back post to head the ball in for a decisive third.

Late on Andrea Belotti came off the bench. He very nearly made it a dream debut as a cross was stood up to the back post, but Di Gregorio produced a brilliant save down low to deny the striker.

Roma then finished strongly to seal a deserved victory at the Stadio Olimpico and continue their good start to the season.