Wärtsilä to controversially lay off 900 workers at Trieste docks 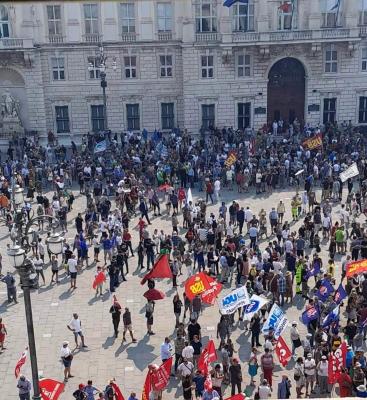 ROME - The negative repercussions of the decision by Wärtsilä, the Finnish multinational engineering company, to close its Trieste plant and relocate to Finland have sparked controversy in the region.

When, a few weeks ago, Håkan Agnevall, president of Wartsila Corp., confirmed the company's decision during a meeting in Rome with the Minister for Economic Development, Giancarlo Giorgetti, the latter declared that the decision “undermines the trust that was at the basis of relations between Italy and Finland”, a significant statement bearing in mind that a few days earlier Giorgetti himself had met his Finnish ministerial colleagues in Finland.

These negative assessments were then echoed by the Trieste trade unions against Wärtsilä's pretence that the workers would take an active part in the dismantling of the factory: "Wärtsilä is shameless," declared Fim Cisl national secretary Massimiliano Nobis, adding that Wärtsilä had "stabbed 900 employees and their families, the entire social and industrial community of Trieste in the back, and snubbed the proposal of the project announced by the Ministry of Development.”

Industry of the Sea, another trade union, went even further demanding that the workers take an active part in the industrial disposal of the site, perhaps even “wearing white gloves.” It added that “'the peaceful garrison at the gates will remain until there are discussion of a serious industrial and employment plan. We will not accept that with a single stroke, an industrial history of decades can be erased and with it the skills of nine hundred workers. We once again reiterate that we need a lasting and solid industrial solution.”

Meanwhile, after having already conducted a strike, a joint statement was issued in which stated: “The trade unions FILT-CGIL, FITCISL, UILTRASPORTI E UGL MARE declare support for the personnel working at the port of Trieste as a sign of solidarity with the workers employed at the plant who risk their jobs. We support voluntary abstention by port operators from all operations concerning the Wärtsilä company, such as the loading of engines and their lifting on board ships, as well as all port operations concerning the company in question, until the dispute is resolved.”

The repercussions reached as far as South Korea where a demand for an explanation came for the delay in the shipment to Dsme (Daewoo Shipbuilding & Marine Engineering) of engines from the San Dorligo della Valle industrial site. The Consul General of the Republic of Korea, Kang Hyung-Shik, asked for an explanation in a letter to the Prefecture of Trieste, which was then forwarded to the President of the Region, Massimiliano Fedriga.

Fedriga responded by saying that he understands the difficulties that the Korean company is experiencing due to the delay in the delivery of engines produced by the Wärtsilä plant, but at the same time emphasized how this situation “was caused by the sudden decision of the Finnish owners to initiate the procedure for the immediate dismissal of 450 employees.”

Fedriga said that their actions “are aimed at defending their rights and opposing the decision taken by Wärtsilä.” Fedriga also asked the Koreans to help resolve the situation asking the Consul to “highlight directly to the Finnish company's management the negative impact that the closure of the plant is also causing to the Korean economy.”