The Way They Were: ‘Our Town’ by Thornton Wilder 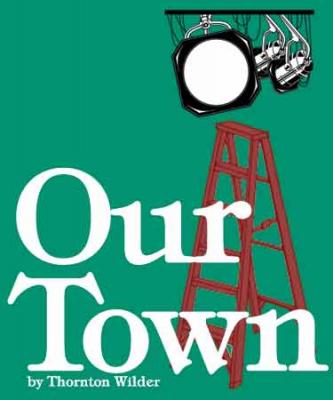 ROME —In many ways, Louise Vinciguerra faced a challenge in directing ‘Our Town’, a Pulitzer Prize winning play written by Thornton Wilder and produced by The English Theatre of Rome. Eschewing naturalism, Wilder stated that “Our claim, our hope, our despair are in the mind- not in things, not in scenery”, and so it was Vinciguerra’s responsibility to prioritise the internal experiences of her characters above all else.

Not an easy task, but this production was successful in staging the average lives of the inhabitants of a small American town with very little set to work with. Vinciguerra’s blocking and choreography was particularly effective; her production managed to explore a variety of different areas in the town whilst simultaneously underscoring the essential homogeneity of life in Grovers Corner.
This could not have been achieved without the remarkable performance from Karen Herschell, who, in her role as the Stage Manager, broke the fourth wall and navigated the audience seamlessly around the Town. With a simple gesture we were shown the railway tracks, the Polish town as well as the Baptist, Methodist and Evangelic places of worship. As a result, the audience came to know it like the back of her hand. We were firmly rooted, both within the immediate vicinity of Grovers Corner and within the wider social context of small-town America at the turn of the twentieth century.
Strolling around the town, Herschell commanded an omniscient and omnipotent authority which was essential for a character that stops and comments upon the action whenever it pleases her.
The play moves from a routine that the Stage Manager coins, “The way we were”, to explore why these patterns of behaviour exist. The banality of life was established by the expertly choreographed mime of preparing breakfast which linked Mrs Webb (Gabrielle Chiaro) and Mrs Gibbs (Rosie Hillesley) in the opening of Act I and Act II.
Likewise, their respective husbands, played by Don Carroll and Bill Guion, helped to complete Wilder’s portrait of the nuclear American family. Both actors successfully played husbands who were designed to be indistinguishable -attentive but weary from their working routines.
The relationship of Emily Webb (Katie McGovern) and George Gibbs (John Penate) underpinned the performance, a changing factor in a play of repetitive action. They were impressive at charting the movement from childhood to adult life, as well as the tender development of their burgeoning romance. Their patter was charming and never saccharine, as together they symbolised a hopeful hunger for life which, uncomfortably for the audience, slowly fades away.
This was a production which got better and better; the last act of the play was easily the best. In the final scene, the dead residents of Grovers Corner address the audience as spirits. Without careful direction, this can often risk hyper-stylisation or else a cringing descent into the realm of the unbelievable. In Vinciguerra’s production it was neither, but rather a prickly and emotionally-charged closing section which concluded the tragically short life of Emily Webb.
The central opposition of the play was precariously balanced by Mrs Soames (Kate Wright) who muses, “My- wasn’t life awful, and wonderful”. Wright exploited the divergence here from the vacuous nature of Mrs Soames’ living character with great effect. It left the audience lingering on Wilder’s darker subtext- that in life each extreme is necessary.
The production was not without its faults, American accents were sometimes slippery, and this could break the illusion that most of the town’s residents had never trekked beyond its parameters. Otherwise, Vinciguerra created a slick and powerful production which forced the audience in turn to consider our own “towns”, complete with our own haunting memories and disappointments.
Performances:
Wed October 13 @ 20:00
Fri October 15 @ 20:00
Wed October 20 @ 20:00
Fri October 22 @ 20:00
Wed October 27 @ 20:00
Fri October 29 @ 20:00
The English Theatre of Rome at Teatro l’Arciliuto, Via della Lungara 233
Price: €15 (full) €12 (reduced) €10 (group of >25 people)
TICKETS / INFO:
rometheatre@yahoo.com or +39 348 935 5626
Culture
Rome