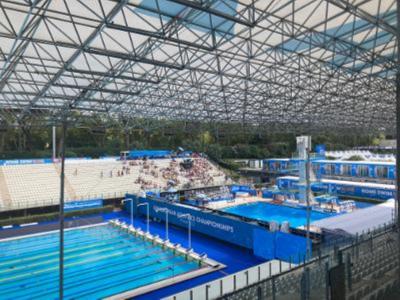 ROME – It was another brilliant day for Team GB’s divers as they claimed a further two medals on the penultimate day of the 2022 European Aquatics Championships.

Andrea Spendolini-Sirieix and Lois Toulson produced a fine team performance to win the 10m platform diving, while Jordan Houlden picked up an excellent silver in the 3m springboard final.

After a solid start, Spendolini-Sirieix and Toulson moved into the gold medal position on the third round of dives. They then never looked back and despite a strong final dive from the Ukrainian duo of Kseniia Bailo and Sofia Lyskun, the British pair sealed gold on the final dive, finishing with a total score of 303.60.

The Ukrainians finished in silver with 298.86 and the Germans Christina Wassen and Elena Wassen took the final place of the podium with 289.86.

For both of them it was their second gold medal of the week, following Spendolini Sirieix’s win in the individual platform and Toulson’s win with Kyle Kothari in the mixed synchronised event.

Speaking to the Insider after the win Toulson was delighted to round off the season on a high.

“I’m really pleased with that performance. Obviously, it’s the first competition that me and Andrea have done together but also it was the first time that we’ve done those dives on 10m.

“We finish on the twist dive and I think it is one of our favourites. When we were going up the steps we knew it needed to be a good one but we were like ‘come on, it’s the final dive of the season for us’ and we managed to do a good dive and it worked out.

“The season for me has been a bit of a rollercoaster. There’s been some highs and some lows but the high definitely outshine the negatives and I’m pleased to be finishing here with a gold with Andrea.”

Spendolini Sirieix was also thrilled saying “I am exhausted but the happiness trumps all of the pain and tiredness. I am so happy to have finished it with Lois. We said before that it was such a fun competition and we did our best. The only time we’d trained before was just before the competition so we proved that we are a great team, both individually and in synchro. I think the European Championships has been brilliant for the whole team.”

For Spendolini Sirieix the win was extra special with her family links to Italy.

“It definitely feels like I’ve got a second home games after Birmingham. I’ve got my cousin here with me today. I had my mum, aunty, uncle for the individual event and I’ve got everybody watching at home in Italy, France and England. I feel really loved and really supported and I’m really thankful for this experience.”

The was more joy for Team GB later in the day as Jordan Houlden won his first ever iindividual medal at a European Championships.

Houlden was in excellent from and was in medal contention right from the start in the 3m springboard event. A great set of six dives gave him a score of 428.55, finishing between the Italian pair of Lorenzo Marsaglia on 453.85 and Giovanni Tocci on 392.70.

Speaking to the Insider he said that “I’m absolutely over the moon to be honest. It’s my first individual medal at a Europeans so it’s another one to add to the collection but I’m ever so delighted. To get one it the last competition of the season feels amazing.

“The nerves got to me a bit and I went a little over the end on my final dive but I did what I needed to do and I got the silver thankfully.”

His teammate Jack Laugher finished the final in fifth.

Team GB finished the day with nine golds, seven silvers and eight bronzes ahead of the final day of the 2022 European Aquatics Championships tomorrow.