An Irish contribution to the Italian electoral system debate 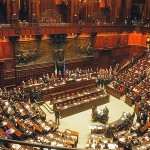 The Chamber of Deputies

ROME- It is obvious enough but has to be said: there is no perfect electoral
system. If we want to elect a legislature, there are two major issues to
resolve. Inevitably we have to compromise between representativity ­ giving
every party or pressure group a voice ­ and effectiveness ­ creating a clear
majority in the assembly so that they can actually take decisions. Secondly,
we also have to build an acceptable form of responsibility into the system ­
who is the single legislator responsible to?

On the first issue, the most representative system is certainly the Knesset
in Israel. The have a single 120 member constituency for the whole country
with a threshold which used to be 1%, then 1.5% and is now 2%, still close
to perfect proportionality. So in order to have a deputy, you only need to
poll 2% over the whole country. Not surprisingly, there are usually between
a dozen and 20 parties in the Knesset and forming a majority to support the
government is normally a nightmare of bartering policy and position.

At the other extreme is the British model where there are 650 single member
constituencies. The winner in each is the candidate who scores one vote more
than the next candidate. Between 40 and 45% will normally give a party a
large working majority around 60% of the seats. Until the last elections,
Britain almost never had problems forming a government and the present
government is the first fully fledged coalition since the war.

They have governability, the Israelis have representation.

On the second point, who chooses the single legislators and who are they
responsible to, the usual (legitimate) answers are that they are chosen by
their party or their electors and are responsible to them and their own
consciences. Less legitimate answers include the lobby or pressure group
that has supported or financed the legislator. Whenever the legislator
votes, he or she has to weigh up the importance of the three
responsibilities and if they are in conflict, take a decision over which one
to follow.
The perceived failure of the present Italian electoral law is in the total
lack of connection between legislator and elector. The members of parliament
hold the post only through party loyalty. In many countries this is not seen
as a problem but because of the personal character or many Italian parties,
not only Berlusconi¹s, a deputy or senator depends on the caprice of the
Leader. And that is not healthy for any democratic polity.

There has been talk of adopting the French double ballot system or the
German system of a list plus single member constituency or re-introducing
the preference votes where voters may give one (or more) votes to individual
candidate(s) of their chosen list.

One solution which has not been considered is the single transferable vote
(STV) used in both the Republic and Northern Ireland, Malta and extensively
in Australia. It is flexible and gives voters maximum choice in individuals
and parties and ensures a small number of parties that have a good chance of
forming a working government.

Constituencies are multi-member but small (three to five usually); this in
practice gives an electoral threshold of around 15% though there is no
official threshold. This limits the number of parties and prevents the
formation one- or two-man parties as in Israel. In Malta, there are actually
only two parties so that one has a majority.

The voters list their choice of candidates, normally the number of
legislators to be elected and not limited to a single party. So one can vote
for candidate 1 in party A as first choice, candidate 2 in party B and
second and 2 in party C as third. A quota is calculated based on the number
of votes cast and the first choice votes are counted. If candidate 1A polls
more than necessary, his second choices are then counted and distributed to
the other candidates; they are transferred until another two candidates
reach the quota. If none reach it, then the lowest scoring candidate is
eliminated and his votes transferred.

Voters have a choice of candidates and parties and the system minimises
wasted votes. The legislator is closely linked to the electorate and to the
party. The territorial link does makes for some clientelistic or pork
barrelling practices but this is not just a function of the system. The
number of parties is limited and will normally be able to form a government.

The only disadvantage is the complication and slowness of the count, a small
price to pay for an excellent compromise. In order to give their candidates
the best possible chance, Irish party workers develop mental arithmetic
skills in probability that befuddle the average observer, a curious
byproduct.

At the end of the day, no system will guarantee good government; the best
cook cannot make a good dish from rotten material but a bad cook can ruin
good raw materials.