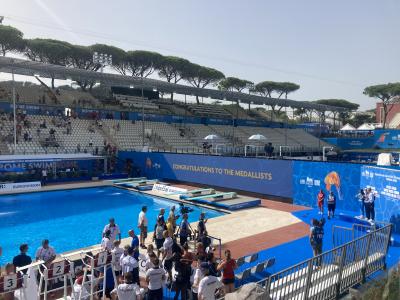 ROME – It was a golden day in the sun for Andrea Spendolini-Sirieix as she produced a remarkable final dive to take the 10m women’s platform title, while Grace Reid and James Heatly secured silver in the mixed 3m synchronised event at the 2022 European Aquatics Championships.

Spendolini-Sirieix, who was second heading into the final round, executed her final dive to perfection to finish with 333.60 points, ahead of Ukrainian Sofiia Lyskun in second with 329.80 points and German Christina Wassen, who took home the bronze with 314.10.

It was the third senior gold medal of the summer for the 17-year-old following two first placed finishes at the Commonwealth Games in Birmingham and the diver was delighted with the win in the Rome sunshine.

Speaking to the Insider she said that “there are so many emotions I’m going through right now. I’m overwhelmed, extremely happy, overjoyed and extremely tired as well. Overall, I think I’m just really proud. I’ve come a long way since January and I’ve had to overcome a lot of obstacles which at first seemed really difficult but now seems a lot easier. I don’t think I could have done anything without God, without my family and without my coach Alex. He has pushed me to levels I didn’t know I could reach and my team. I’ve said it before and I’ll say it again, my team are the best team in the world. Thanks to them and their support it made the impossible possible.

Heading into the final dive she held her composure despite the nerves to deliver gold.

“My heart was beating through my throat so I was a bit nervous but I just wanted to put a block like the Commonwealth Games again and I think I did a really good job and I’m proud of how I finished.”

Her teammate Lois Toulson recovered from a mixed start to the final to finish in sixth.

Earlier in the diving pool Great Britain’s Grace Reid and James Heatly were unlucky to miss out on gold in the 3m mixed synchronised event – finishing just 3.93 points behind the German gold medal winning duo of Lou Massenberg and Tina Punzel.

However, the pair were happy with the medal and Reid said to the Insider that they felt “really good. It was a consistent performance. We had fun out there and won a silver medal so we’re really happy.”

The two medals helped to take Great Britain into third place in the medals table ahead of Hungary.

They are current on five golds, six silvers and six bronzes with the final evening session of swimming to come.