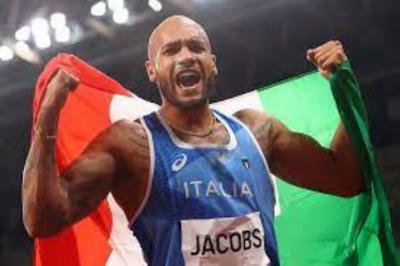 Jacobs won gold in a time on 9.95 secondS Photo: Reuters

MUNICH – Italian sprinter Marcell Jacobs took home the crown in a time of 9.95 seconds at the 2022 European Athletics Championships.

Jacobs, who came into the race as the reigning Olympic champions from the 2020 Tokyo Olympics, held off Great Britain’s Zharnell Hughes to win by 0.05 seconds. Jeremiah Azu made it two GB athletes on the podium, winning bronze in a time of 10.13.

The Italian becomes just the fourth athlete to hold both the Olympic and European titles at the same time, following in the footsteps of Armin Hary, Valeriy Borzov and Linford Christie.

He is also the first Italian to win the 100m European title after Pietro Mennea in 1978.

Jacobs, who faced an injury disrupted season and was forced to missed last month’s World Championships in Eugene, said to Reuters that “thank you to those who rooted for me. It has been a complicated, difficult season.”

He added that “this was a difficult season with problems, with injury but my leg is not good. I am not happy about how the race went technically, there were some problems, but I am over the moon with the gold medal.

“After Olympic gold, now I got the European gold. I’ve Got to get the World Championship gold now. We also look forward to the relay because the Italian team also wants to excel there.”

He later posted on his Instagram account that “bringing home the gold is a buzz and gives me confidence for the future. See you soon!”