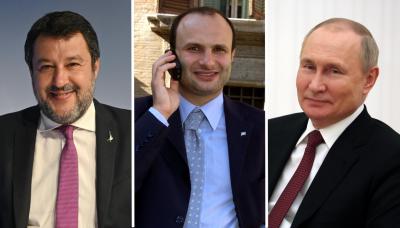 Matteo Salvini, Antonio Capuano and Vladimir Putin
ROME -- An official at the Russian Embassy connived with Antonio Capuano, a shadowy lawyer representing League leader Matteo Salvini, to bring down the government of Prime Minister Mario Draghi by  suggesting the League withdraw its ministers from the governing coalition, La Stampa newspaper reported Thursday.
The revelations about contacts between Capuano, an advisor to Salvini on international affairs, and Olek Kostyukov, a senior official at the Russian Embassy in Rome who is believed to be an intelligence officer, two months before the Draghi government collapsed, cast a shadow over Salvini's campaign for the Sept. 25 election. Kostyukov asked Capuano whether the League would be willing to pull out of the Government, according to La Stampa, in what was evidently an attempt to subvert Italy's support for Ukraine against the Russian invasion.
Democratic Party leader Enrico Letta, said "the revelations today on links netweem Salvini and Putin's Russia are disturbing, the election campaign is starting in the worst possible way, with a big smear over this affair. We want to know if it was Putin who brouight down the Draghi government."
Capuano hit headlines earlier this year after it emerged he had arranged for the Russian Embassy to pay for air tickets for Salvini to fly to Moscow to meet Putin. La Repubblica newspaper reported subsequently that Capuano's shadowy dealings with embassies in the past included failing to meet a promise that the Kuwaiti Embassy would pay 10,000 euros owed to the Italian Insider newspaper https://www.repubblica.it/politica/2022/05/31/news/capuano_imbrogliato_m...
Draghi's Government collapsed last week after the League and its ally Forza Italia failed to support the prime minister in a crucial parliamentary confidence vote.
jp
Embassy Row
World
Italy