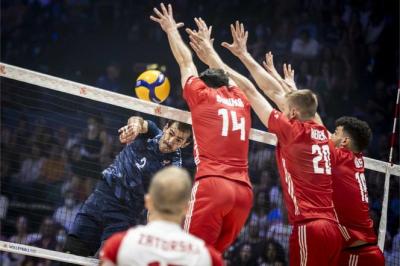 The first set was a tight affair with the scores locked at 10-9 before an ace from outside hitter Bartosz Kurek gave the initiative to Poland.

The second set started better for Italians as they led 10-7. However, midway through the set Poland managed to level the score at 11-11 after capitalizing on two mistakes from Yuri Romano, followed by an ace from Kurek.

Both sides exchanged points in an exciting content until the end of the set when the rotation of serve proved to be key. The Poles had two set points and eventually converted the second with a successful score from Kurek.

In the third set, both teams played a very even game and Poland managed to gain an advantage thanks to strong serves.

Thanks to aces of Kamil Semeniuk, Mateusz Bieniek and Jakub Kochanowski, the Polish team held their nerve to win in three sets and secure the bronze medal.