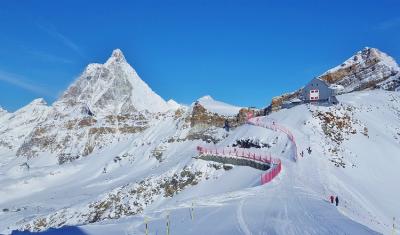 The Italian side of the Matterhorn

BREUIL-CERVINIA – Low snowfall in the winter combined with rains over 4,000 metres above sea level, and the heat and drought that have hit Italy in recent months have made it impossible to ski, reported Zermatt Bergbahnen who manage the ski lifts in the area.

The summer ski area of Zermatt-Cervinia has had to bring summer skiing to a close. Ski lifts on the Plateau Rosà glacier in Switzerland, near to Cervinia, have had to stop completely. Summer skiing was suspended on the Stelvio Pass Glacier on July 20.

“The problems are due to the lack of snow,” said the Zermatt Bergbahnen company, “the technical maintenance of the ski lifts and on the preparation of the slopes have been affected by this, at the moment, the usual standards cannot be guaranteed.” Zermatt Bergbahnen have highlighted that this is only a temporary interruption and that maintenance work on the slopes and ski lifts will continue despite this.

In the event of “lower temperatures” and “sufficient snowfall”, training and summer skiing will be able to resume with CEO, Markus Hasler ensuring that the current situation shouldn’t hinder the Matterhorn Cervino Speed Opening. The first cross-border world cup ski race is set to take place at the end of October and start of November 2022, crossing the Swiss-Italian border and this is expected to go ahead as normal.