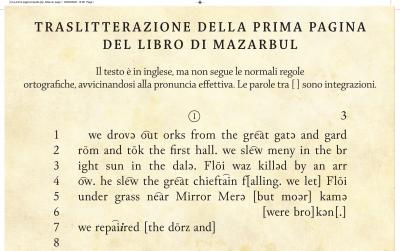 Transliteration of part of the first page of the Book of Mazarbul, Photo: Ufficio Stampa - Università di Torino

TURIN – From July 13-20, the University of Turin hosted an exhibition, a workshop and an international conference dedicated to the works of J.R.R. Tolkien, and to invented languages ​​that have recently started to play an important role in pop culture.

The conference entitled “I-CONlangs 2022 - International Conference on Constructed Languages” focused on invented languages, the so-called conlangs appearing in various texts of culture. The I-CONlangs conference aimed to establish an academic forum for the international sharing of knowledge and results related to the theory, methodology and applications in this still little studied linguistic field.

A particular attention was given to artlangs, which are artistic languages designed for aesthetic and phonetic reasons, including languages invented for fictional universes such as literary, film, and television. In recent years, artlangs have become an integrated part of entertainment industry and pop culture. The construction of fictional universes played a central role in some film and television productions, which achieved enormous commercial success. An example of this phenomenon is film adaptations of J.R.R. Tolkien’s fantasy novels.

As a part of the conference, a workshop about elven languages appearing in Tolkien’s books was organised, led by Edouard Kloczko, a well-known student of the languages of Tolkien's work and founder of the World Elvish Language Association. An exhibition entitled Mazarbul, the secrets of the Dwarves, was also presented, curated by Kloczko and Beatrice Mazzoleni.

The purpose of the exhibition was to illustrate Tolkien's original project relating to the Book of Mazarbul, the text that the Fellowship of the Ring found in the mines of Moria in Tolkien's fictional universe, making for an interesting and philological game with the reader. The theme of the exhibition was focused on the created alphabet by Tolkien and the very conception of language itself.

The initiative arose from the cooperation of the Department of Modern Languages and Literatures and Modern Cultures of the University of Turin and WELA.