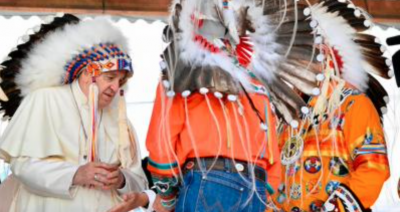 EDMONTON - Pope Francis began his trip to Canada by keeping his promise to apologise for the church’s role in the “evil” abuse of the native indigenous population.

In his 37th official papal visit he said, “I want to reiterate the shame and I humbly ask for forgiveness for the evil committed by many Christians against the indigenous population.”

“Many Christians have supported the idea of forgiveness. The polices regarding the residential schools were catastrophic. What the Christian faith tells us is that it was a devastating mistake that was completely incompatible with the gospel.”

The apology comes after indigenous leaders had asked for decades for an official response after their culture had been systematically destroyed in residential schools.

“I thank you” the pontiff continued “for bringing this to my attention all of the heavy burdens you carry. Today I am here in this country whose ancient memory guards the scars of wounds that still remain open. I am here because the first step of this pilgrimage is to ask you for forgiveness from all of your heart.”

“I ask for forgiveness for the ways in which many Christians kept a powerful colonising attitude that oppressed the indigenous people. I am sorry. I especially want to ask forgiveness for the ways in which members of the church and the religious community have cooperated in the cultural destruction and forced integration policies of the governments of the time, which ultimately led to the system of residential schools. “

He travelled despite a persistent knee injury that has restricted for some time to a wheelchair and forced him to cancel recent visits to the Democratic Republic of the Congo and South Sudan.

Francis underlined that “it saddens me to know that that territory complete with value, language and culture that that gave its people a genuine sense of identity was erased and that you continue to feel the effects. The church asks for forgiveness for the sins of its members.”

The pope added that “it is necessary to remember how the policy of assimilation were devastating for the people of this country. When European colonisers arrived for the first time it was a great opportunity to develop fruitful links between cultures, traditions and spirituality. However, in large part it did not happen. The policy of assimilation have systematically marginalised indigenous people with their language and culture supressed and the physical and psychological abuse that they suffered.”

He finished by saying “I know the suffering, trauma and difficulties that indigenous people suffered all across the country and I have offered my words on the path to forgiveness. Today I am here to remember the past, to cry with you and to look at the tomb in silence. Let the silene help to internalise the pain.”