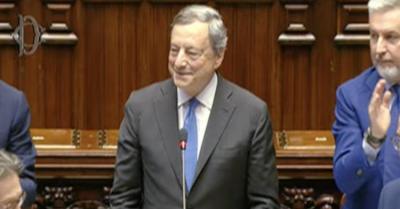 Draghi received a standing ovation in the Chamber of Deputies Thursday

Signor Draghi anounced his imminent decision to quit definitively Thursday morning in the Chamber of Deputies after receiving a standing ovation from members of his embattled government when he arrived in the lower house. The prime minister, now a caretaker leader pending new elections to be decided by Signor Mattarella, was expected to return to the Chamber later Thursday after confirming to the head of state that he no longer has a working majority.

Sig. Draghi thanked the lower house for their support during his 18 month administration, quipping that even former central bankers such as himself sometimes experience heartfelt emotion.

"Above all, thank you, thank you. Thank you for this," Sig. Draghi, 74, said, smiling despite looking battered after a tough week fighting to keep his government alive.

"Naturally, sometimes even the heart of central bankers gets used, occasionally. Thank you for this and for all the work done in these months."

Assuming that Mattarella decides to dissolve parliament now or imminently, an early parliamentary election could be held between Sept. 22 and Oct. 22, political experts say.

Italian newspapers have speculated that the election, normally held on a Sunday, could be set for Sunday Oct. 2 since Sept. 25 is a Jewish holiday.

Draghi first handed in his resignation last week after the radical Five Star Movement withdrew its support from him. But the head of state asked Draghi to return to Parliament Wednesday to see if he had support to carry on. In the Senate vote Wednesday night the right-wing zenophobic League party and its ally Forza Italia, headed by convicted criminal Silvio Berlusconi, also withdrew their support, evidently deciding to precipitate an early election in which opinion polls suggest they could win if allied with the far-right "post-Fascist" Brothers of Italy party founded by supporters of Fascist dictator Benito Mussolini.

Election of a far right government in Italy would upset the balance of power in the European Union and undermine support for the war in Ukraine, an outcome that would be welcomed by Russian President Vladimir Putin. Earlier this year a scandal erupted when it emerged that League leader Matteo Salvini had received air tickets to fly to Moscow paid for by the Russian Embassy, under arrangements for his trip by a shady lawyer working with several embassies in Rome including Kuwait, Antonio Capuano.