Draghi battles on despite centre-right treachery 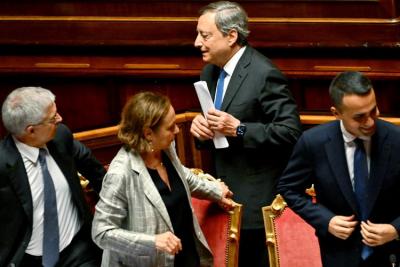 Draghi delivered speech to the Senate, deciding the fate of the government

ROME – Italian Prime Minister Mario Draghi refused to throw in the towel Wednesday despite centre right parties boycotting a confidence vote in the Senate together with the Five Star Movement. He will attend a debate in the Chamber of Deputies Thursday, evidently to make a last ditch attempt to save his government, Palazzo Chigi said.

Draghi would not go to the Quirinal Palace Wednesday night, his office said, ending speculation that he was about to resign in the coming hours, and indicating that he means to try and continue garnering votes for his embattled coalition. Draghi evidently hopes that he may obtain support Thursday from Five Star Movement (M5S) MPs and possibly from more renegade MPs from Forza Italia who disagree with their leader Silvio Berlusconi's decision to yank support from the coalition, political commentators said.
The government is due to face a confidence vote in the Chamber of Deputies Thursday and Draghi may hope that he can win more convincingly in the lower house, possibly due to further defections from M5S deputies who disagree with their embittered leader, Giuseppe Conte, who started the government crisis last week by refusing to back Draghi in a confidence vote. Draghi resigned last week but President Sergio Mattarella declined to accept the resignation and told him to return to parliament to check out whether he still has a majority.
Draghi stormed out of the Senate building earlier Wednesday evening and returned to his office at Palazzo Chigi after his appeal for national unity largely fell on deaf ears. The government won a confidence vote by 95 to 38 but Draghi no longer had an absolute majority of senators.
"What is needed is a government capable of acting effectively," Draghi said earlier.

"We are here because Italian asked us to be," Draghi said in a speech that opened the debate. "Parties, are you ready to reconstitute this pact?"

League Senator Massimiliano Romeo said the League was presenting a motion proposing that "the Senate give it support to the action of a government that has been profoundly renewed both in its political choices and its composition." The reference to the composition meant that the Five Star Movement should be excluded from a renewed coalition under Draghi, a proposal that the centre-right alliance led by media mogul Silvio Berlusconi's Forza Italia endorsed a short time after the League in a similar statement.

Demanding unity among members of his coalition, Sig. Draghi left this threat hanging as an ultimatum for him to remain in government. He declared that the coalition should be in consensus over issues such as sending arms to Ukraine, tackling the energy crisis and social inequality among others, if he was to stay in government.

Senators from the Five Star movement remained obstinate over the 26 billion euro cost of living package, and demanded a minimum wage and a green home renovations scheme. Sig. Draghi addressed these concerns in his speech, pledging to make progress towards introducing a minimum wage. The former European Central Bank’s chief also addressed key policies of the League, such as cutting taxes, and greater autonomy to the regions.

Should Sig. Draghi leave, it would be Italy’s third government collapse in three years. The next general elections are due to take place in June 2023, but if Sig. Draghi steps down, elections as early as October are expected to be called. Italy has not held autumn elections since World War Two, as this time is usually reserved for going through the budget.

Even without the support of the Five Star Movement, Sig. Draghi could still get a majority, however this counts on the decisions of the League and Forza Italia. Sig. Draghi has so far claimed to be unwilling to lead a coalition without the Five Star Movement, however the League and Forza Italia have contended that they do not want to be a part of a coalition with the populist party. Given that Sig. Draghi’s initial mandate pledged coalition across the political spectrum, it is uncertain as of yet how this will be reached.

Pro-Draghi sentiment has become prominent across the country with rallies in his favour having taken place on Monday in Rome and other cities, as well as over 1,500 mayors, including from opposition parties, signing an open letter to Sig. Draghi, pleading with him to remain in government. A petition called “Draghi stay” has also gained more than 100,000 signatures.