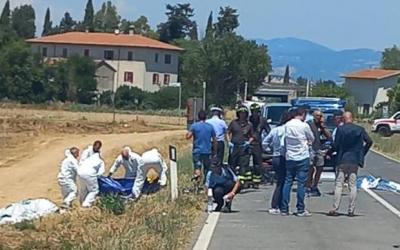 Collision on Via Aurelia Vecchia

ROME – An investigation was underway on Friday morning into the deaths of three cyclists, after an 82-year-old driver swerved and hit a group of cyclists on Via Aurelia Vecchia, while under cardiac arrest.

Six other victims of the collision in Grosseto have been hospitalised with serious injuries among the 20 or so cyclists who were with them, and the driver has been found dead in his car.

Mario Fiorillo, the driver, was reported to have been feeling unwell before going into cardiac arrest at the time of the crash that resulted in the death of the three cyclists: Roberto Seripa (71 years old), Antonio Panico (56 years old) and Nilo Naldini (75 years old).

Some 118 vehicles were deployed to the scene, firefighters, carabinieri and police with the public prosecutor, as the road was closed, with traffic being diverted to Via di Acquafredda.

Maura Naldini, who survived the crash testified, “We were in a group of around 20. I saw the car swerving as if there was an obstacle in front of it. I thought he was going to crash into the shop window, but he got closer and closer to us. Then I heard a huge crash and turned around and saw the massacre.

Enrico Guazzini, an agent of the municipal police of Grosseto, at the head of the pack of cyclists before seeing the car said, “I saw the car was still in the wrong lane after the bend of the road, shouted, ‘Be careful!’ and slipped into last place behind the group. Then the crash happened. It’s a miracle I’m alive.”

Via Aurelia Vecchia spans from Rome to Luni, and is Roman road, constructed in approximately 241 BC. It poses a threat to cyclists and drivers with its narrow and unsafe bends.