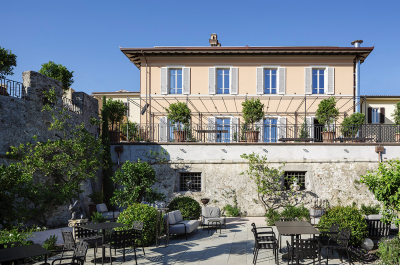 PIETRASANTA - Opening their doors on July 8, 2021, Hotel Paradis Agricole, a haven of tranquillity and Hotel Paradis Pietrasanta, a hub of artistic innovation and creativity, celebrated their one-year anniversaries last Friday. The two hotels, each in their own, unique way bring a breath of class, taste, and energy to the Tuscan seaside town.

Nestled just outside the historic centre of Pietrasanta and its narrow streets brimming with artistic influences, is a small, idyllic Tuscan paradise, founded by Alain Cirelli and Laurent Flechet, who bring with them a French influence, imbricated with a traditional Tuscan touch.

The two owners saw an opening in the market for a local produce shop, something they claimed the town was missing.

“Pietrasanta was lacking an elegant place, a high-brow bar, and a produce shop that makes the most of the nearby abundance of fruit, vegetables, and olive trees,” declared Alain Cirelli. He spoke of a “higher-level clientele” that frequent the town for its stylish art galleries, and bohemian bars and cafes, as well as its fascinating history and architecture.

Hotel Paradis Agricole, with its calming atmosphere, creates a retreat-like return to nature for its guests, and is the only hotel in the area with extensive gardens. Flanked by rolling hills, a velvety Tuscan landscape, and surrounded by cypress and olive trees, is its luxury farmhouse with gardens that flaunt a myriad of sculptures and works of contemporary art, such as impressive pieces by French sculptor, Bernard Bezzina. The interior of the hotel is adorned by precious marble from Carrara’s marble quarries, a world UNESCO heritage site, only a 45-minute car journey away. Wooden-beamed ceilings, airy rooms, and exposed brick walls recall a typical rustic Tuscan farmhouse, bathed in a chic, modern elegance with contemporary influences from both French and Italian art. An eclectic collection of art catalogues, French and Italian novels, and sculptures from workshops in Pietrasanta, handpicked by the owners, animate the rooms, each one unique.

Among its eight hectares of land, the hotel boasts a picturesque garden thought up by famous French landscape architect, Jean Mus. Opposite the fountain, are chairs on the wooden deck where the guests can sit and relax by the sun-facing pond.

In the garden are 10 greenhouses, the first, a 4,000 m² open space, has seen marriage celebrations and high-brow events, while the other nine cultivate the succulent, home-grown fruit, vegetables, and herbs, including tomatoes, string beans and basil that perfume the hotel’s cuisine. The first greenhouse is teeming with artistic inspiration, sculptures and paintings are scattered across the room, mimicking an artist’s atelier. The works are left untouched, engendering an authenticity. It feels as though the artist has left his workshop for lunch break, leaving behind him sprigs of artistic creativity in the midst of being thought up, to decorate the room. Its glass walls lend a stunning view of the vivid green countryside that encircles the grounds with beams of sunlight flickering through the slats.

Wondering along the winding paths of the farm, you can find olive groves, animal enclosures with chickens, ducks, rabbits, pigs, and a local produce shop that highlights the vicinity of the produce used in the kitchen, 100% Tuscan. The Paradis Agricole company was launched in August 2018 to produce premium extra virgin olive oil. There are three different olive oils on offer to guests in the hotel, which are also available to buy from the shop. ICP Toscano is obtained by natural harvesting in October with notes of artichoke and an intense taste; Monovarietale is defined by its rosemary hints; and the 100% Italiano is harvested during November and is an every-day oil. The ins and outs of the production process were delicately explained by Filippo Francesconi, who manages the 5,000 olive plants, as well as the fruit and vegetable gardens, and is available to teach guests about the process.

With only nine rooms, the hotel gives a familial and intimate feel. A large seasonal outdoor swimming pool provides a fresh relief from the sun and guests can take classes in it, as well as yoga and muscle toning in the gardens.

In the evenings, summer activities with a Tuscan theme are organised, such as cinema, music and show cooking.

Outside the farmhouse, are five bikes to explore the Tuscan countryside with, or to ride to the second hotel 1km away, Hotel Paradis Pietrasanta.

Paradis Pietrasanta, in the middle of the historic centre of the town, overlooking Piazza Crispi, brings together the local artistic influences with an added French touch. The hotel, with its 12 spacious and luxurious rooms, occupies an 18th century palace that has kept its authenticity, and yet blends effortlessly with the animated contemporary spirit of Pietrasanta.

A trio of French architects designed and brought a breath of fresh air into the palace, while maintaining its original charm and history. “Paradis Pietrasanta was a first for us, in two aspects,” said Benjamin Macaire, Thibaut Julien and Victor Jauvin, co-founders of Point3architecture: “This is our first hotel project and our first restoration in Italy.”

Cirelli, who was given free rein with the hotel, wanted the palace to be “part of a continuity” that “integrates the hotel into its context” with the use of marble, terracotta, ceramics, and cast iron. Captivated by the ties between history and art, the owners wanted to maintain the palace’s authenticity while adding their own unique touch that still preserves its history and manages to revive its past beauty.

The garden of Pietrasanta, reminiscent of the Garden of Eden, and designed by Jean Mus, is a hidden peace haven with its fountain, ‘Fountain of the Artists’, carefully chosen sculptures, and abundance of plants and herbs. On arrival, we were greeted by the genial and accommodating kitchen staff, as well as with the aromatic perfumes of the seasonal herbs growing in the garden that wafted around, passing by each table, and making it a real sensorial experience.

Cirelli is the former owner of two cooking schools in Paris and is a renown Parisian chef with twenty years of experience in major French and Italian restaurants, such as Printemps, Paris. Impassioned by Pietrasanta and all it has to offer, along with chef Jonni Bertolaccini, he brings an elegant and organic Franco-Italian cuisine to the guests.

We were served exquisite plates with seasonal vegetables from Paradis Agricole, including string beans, tomatoes, and beetroot in the Risotto alla barbabietola e goronzola, and a succulent baccalà, along with a fresh raspberry sorbet to finish off. A selection of Tuscan wines, such as Chianti, Pinot Nero Rosso, as well as a delicate Vallepicciola Perlinetto Rosé (2017) and a clear and crisp Sangiovese Rosé were served, perfectly complementing each aspect of the meal.

Pietrasanta, in the heart of Versilia, often referred to as “Little Athens”, and of medieval origin, intertwines ancient with modern influence, just as the Hotel Paradis Pietrasanta has done, using the town as a guide for inspiration. Its Romanesque cathedral on the Piazza Duomo, made with marble that Michaelangelo selected from the Carrara marble quarries serves as one of the backgrounds for contemporary artist, Marco Cornini’s sculptures. From July 1 to Sep.18, some forty sculptures in marble, bronze, and terracotta are on display around the historic centre as part of his exhibition “The Wonder of Love”, curated by Angelo Crespi that celebrates the sensuality of the female figure.

Pietrasanta's exuberant, cobbled streets make a perfect environment for the location of Hotel Paradis. Cirelli noted that the space brings high-level clientele to the town, especially Italian, with frequent guests from Florence, Parma, and Milan.

“On the opening of our hotel, the mayor told us that he has never seen so many Ferraris,” Cirelli jokingly told us, illustrating the impact the hotel has had on the economy of the town and in Pietrasanta becoming a player in the hotel world.

Hotel Paradis Pietrasanta is a space where everything comes alive, illuminated by culture and Mediterranean influence, while at Hotel Paris Agricole, time pauses, as the guest is fully immersed into the countryside’s spectacular panoramas. Both simultaneously exude creativity and elegance, rich with artistic inspiration and creation that spills out of the hotels’ lavish walls and establishes the perfect place to truly experience “la dolce vita.” 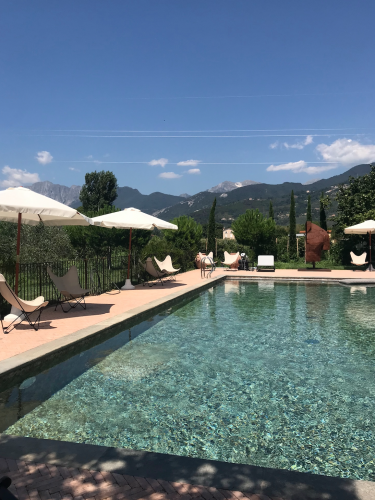 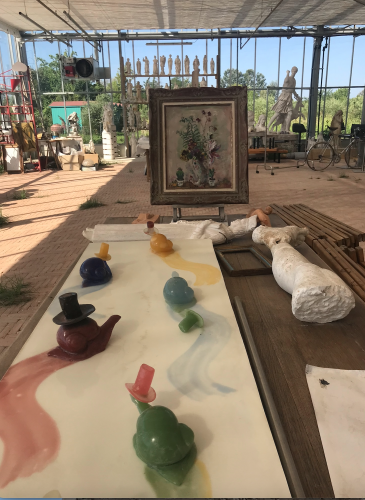