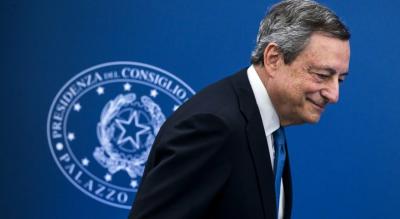 ROME – ROME -- Italy's political crisis sparked by party differences over Ukraine and how to clear the Eternal City of mountains of rubbish deepened Friday after Italian President Sergio Mattarella declined to accept the resignation that Prime Minister Martio Draghi presented to him in a huff at the Quirinal palace. The elderly head of state told the former central banker known as 'SuperMario' to check with Parliament on Wednesday whether he still has sufficient support to continue governing to prevent Italy being forced to spoil its summer vacation by holding an early election that would probably be won by the opposition 'post-Fascist' Brothers of Italy party and right-wing allies.

Draghi told his coalition cabinet he was quitting Thursday night after the radical Five Star Movement failed to support the embattled prime minister in a confidence vote in the Senate over a massive economic package including measures to stem the flow of rubbish on Rome streets, which regularly attract hoardes of wild boar from the countryside and natural parks.
The M5S, led by the former prime minister Giuseppe Conte, boycotted the vote on a 26 bn euro cost of living bill, arguing that the funds set aside to help households and businesses hit by inflation and rising energy costs were insufficient. The bill also included a provision allowing Rome authorities to build a huge incinerator for the Italian capital’s rubbish, a project M5S has always opposed.
President Mattarella said that getting another reading from Parliament on whether Draghi can carry on amounted to "a precise democratic duty of transparency, that is owed to the country." Draghi will have to break off from the cruel cockpit of Roman politics Sunday to fly to Algeria for a summit meeting aimed at securing more natural gas supplies to replace those Italy depends on from Russia, which is gradually turning off its supply to the peninsula. Critics point out that Algeria as the largest purchaser of Russian arms in Africa will use the money it gets from Italy to buy Russian weapons, but such details are lost as the Rome government seeks to assure the public and NATO allies that it is weaning Italians off the dependence on Russian energy.
The parliamentary drama in Rome had been bubbling for weeks as the Five Star Movement evidently felt obliged to show that it was capable of flexing its muscles to cause a major political crisis despite the baby-faced Foreign Minister, Luigi Di Maio, forming a schismatic breakaway party together with 50 M5S deputies.
Pundits also saw the boycott as a personal vendetta by Conte who purportedly resented Sig. Draghi replacing him at Palazzo Chigi, the prime minister's office, which on Thursday was surrounded by striking taxi drivers letting off noisy firecrackers, adding to the impression that Italy was a banana republic battling to prevent mob rule.
Only on Tuesday Draghi had been applauded by hundreds of foreign journalists who gathered at the Villa Aurelia for a glittering dinner organised by the foreign press assocation in honour of the unelected prime minister where he cracked jokes and posed for selfies with reporters who now have to explain to their editors how their idol's support has unravelled.
Draghi’s government won the Senate vote Thursday afternoon by 172 to 39, but the unprecedented abstention of the M5S left the 17-month-old across the spectrum coalition of national unity looking shakier than ever.

Draghi met with the head of state for some 55 minutes after the vote and then returned to his office, Palazzo Chigi, where he called the cabinet meeting for 6:15 p.m. Political commentators speculated that Mattarella asked Draghi to carry on as prime minister and Draghi considered his position but evidently decided it was untenable.

On Wednesday, Giuseppe Conte, leader of the Five Star Movement and former Prime Minister, announced the populist party’s refusal to sign the bill, as the funds set aside for a cost-of-living support package were not deemed sufficient. Attempts at mediation were rejected, as the promise of a new social pact and new measures against low wages did not succeed in swaying the party’s adament stance.

Matteo Salvini, leader of the right-wing party, the League, said at a news conference in Rome that early elections were the best solution to give Italian people their say. Giorgia Meloni, leader of the far-right Brothers of Italy party, who was the only one to not join Sig. Draghi’s coalition, has called for immediate elections.

“A majority without the Five Star Movement seems to me a totally improbable hypothesis. In addition, Parliament is sovereign, so we will listen to the people,” Letta declared.

A decrease in support for the Five Star Movement in recent months in local elections and opinion polls, as well as the schism in the party last month when foreign minister, Luigi di Maio left the party over its unwillingness to send arms to Ukraine, has led to a struggle to revive the party to its former popularity in 2018. On the confidence vote, Di Maio attacked his former party members, claiming, “The Five Star Movement party leaders have been looking for a crisis for months to give them the opportunity to disrupt the government to put an end to the Draghi government.” Ahead of national elections due to take place in the first half of 2023, the populist party “hope to rise in the polls after nine months of campaigning,” told Di Maio, “This only propels the country towards an economic and social abyss. We cannot be complicit in this cynical and opportunist plan that drags the country into an early election and into economic and social collapse.”

Sig. Draghi told a news conference on Wednesday, “A government does not work with ultimatums, it loses the point of its existence,” adding that he would not be willing to carry on as prime minister should the Five Star Movement pull out.