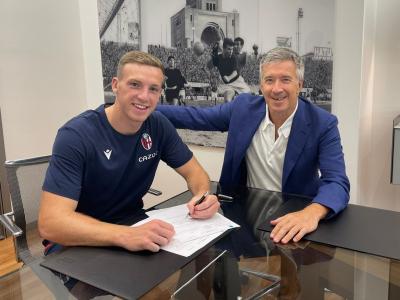 BOLOGNA - Lewis Ferguson has completed his transfer from Scottish side Aberdeen to Bologna FC for an undisclosed fee, reported to be in the range of £3 million, the Italian club have announced.

The 22 year old midfielder made 169 appearances for Aberdeen across four seasons with the club, scoring 37 goals.

The midfielder arrived in Bologna yesterday and in a video posted on social media said “I am on my way to Pinzolo to meet up with my new teammates. I can’t wait to get started and I’m looking forward to the new season. Forza Bologna!”

Ferguson then completed his first double training session with his new club in the Italian Alps where Bologna are currently on a pre-season camp. He could be in line to make his debut for I Rossoblù when the travel to the Netherlands to face AZ Alkmaar on Sunday 24 July.

He was Aberdeen’s top scorer last season with 11 goals in 36 appearances in the league. He originally came through the youth system at Hamilton Academical having also spent time with Rangers.

He then moved to Aberdeen, where he made his debut against Burnley in the UEFA Europa League. During his time in Scotland, he guide Aberdeen to the 2018 Scottish Cup final as well as a fourth placed finish last season.

At international level he made appearances for Scotland U19s, U20s and U21s before making his debut for the senior squad against Denmark as a substitute in September 2021. He has made a total of 4 appearances for his country so far.