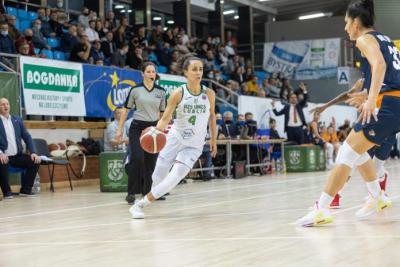 Sklepowicz was born in Wroclaw on Dec. 20 1996. She is 173 cm tall and plays in the point guard position. For the last three seasons she has played at AZS-UMCS Lublin in Poland. During the 2018/19 season she played at AE Sedis Básquet in Spain. Previously she played for SMS PZKosz Lomianki and then for Ślęza Wrocław, her hometown team. Moreover, the Polish player appeared for he the national team 15 times, having been a part of the U16, U18 and U20 youth national teams. Now she will be the third foreigner basketball player in the history of club in Verona.

"I am a player who loves making the teamplay. I like shooting, as well as putting my teammates in shooting positions, while in defence I know how to put pressure on the ball and be aggressive," said Sklepowicz during the interview.

The Polish basketball player also highlighted that she had no doubt about joining the Alpo Basket. "I talked to my agent and we said that Italy would be the best place for me. I liked the idea and I immediately said yes when Alpo contacted me. I know what they expect from me and I am ready. Verona is a beautiful city and I'm sure I'll be fine there."

Sklepowicz is looking forward to the beginning of the pre-season. She already has valuable experience in playing abroad, in Spain. “I have wonderful memories of that season and I hope that the experience at Alpo will be just as good," she rounded off by saying.