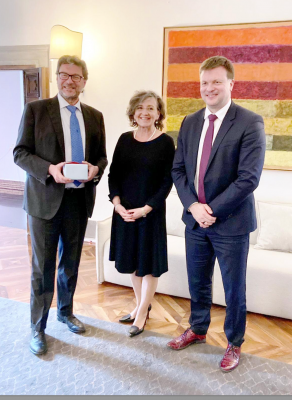 ROME – Italy's Minister of Economic Development, Giancarlo Giorgetti, was to visit to Finland from June 29-30 to examine potential industrial and economic capacities that the country, albeit with a limited population, manages to generate.

Giorgetti will meet with Minister for Development Cooperation and Foreign Trade, Ville Skinnari, whom he had met in Rome last May during the latter's visit to Italy, Minister of Transport and Communications, Timo Harakka, local economic operators, as well as members of the Italian business community.

Recent news reports that in the international competitiveness ranking, the IMD World Competitiveness Ranking, Finland rises to the highest ranking in 17 years, having received high scores for technological infrastructure, education, health, environment, and business efficiency.  The survey rates economies on how attractive they are to foreign investment. Finland rose to eighth place out of 63 countries, just ahead of neighbouring Norway in ninth place and the United States in 10th. Denmark topped the list for the first time in the 34-year history of the ranking, while Nordic Sweden dropped down two notches to fourth place. Italy ranks 41st, the same as in 2021 while it was 44th in 2020.

Finland's ranking was improved by the performance of companies, among other factors, according to think-tank Etla Economic Research, which provided data for the ranking. "During the coronavirus pandemic, the decline in the Finnish economy was more moderate than the average in other countries. Finland's GDP contracted relatively little in 2020, so the recovery was not as strong compared to others. Also, less foreign direct investment came into Finland than in the previous year," according to Etla researcher Ville Kaitila. Finland was ranked fourth in the world for infrastructure, with particularly high scores for technology infrastructure-ranked second-as well as education and health/environment while it was ranked fifth in terms of business efficiency, including first place for "social structure”.  In government efficiency, it ranked 10th, losing ground to tax policy. In overall economic performance, Finland ranked 44th (Italy 41st); however, overall, the country's ranking has steadily increased since 2018, when it was ranked 16th. At its weakest, Finland was ranked 20th between 2013 and 2016. Around the turn of the millennium, however, the country ranked second or third for five consecutive years.

The IMD World Competitiveness Yearbook evaluates 63 economies based on 333 competitiveness criteria. It has been published since 1989 by the Switzerland-based International Institute for Management Development; Helsinki-based Etla is funded by major employer groups such as the Confederation of Finnish Industries (EK) and the Confederation of Finnish Industry and Employers (TT).

Finland is ranked second in the Digibarometer 2022, which compares 22 countries with a composite index consisting of 36 variables. The ranking is the same as last year. Denmark is in first place as last year. Norway rises from fourth place last year to third. The United States is in fourth place, the Netherlands in fifth, and Sweden jumps from third to sixth. The bottom of the list is once again occupied by Brazil, Italy and Russia. Digibarometer is a study that assesses how well individual countries use digitization and how they compare with each other in this regard and measures the use of digital capabilities. In other words, general factors such as education levels or a country's role as an ICT producer, for example, do not affect the score. It is measured at three levels (capabilities, use, and implications) and three sectors (business, civic, and public). Each sector is examined at each level, thus forming a nine-cell scoring matrix for each country.

Finland has been among the top three countries in the Digibarometer during its nine years. It even held the top spot once in 2016. Finland's high ranking is explained by its uniform performance on various indicators, and its ability to use digitization is among the best in the world as is its actual use (3rd place). On implications (6th), however, Finland has a lower score. Previously, the corporate sector has been Finland's leading digital sector, and now the position of Finnish companies in international comparison (4th this year) is declining slightly. The public sector loses one position in the ranking but still scores very well (2nd). In the civic sector, Finland also ranks well and is in 4th place.