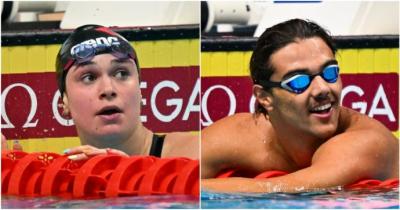 Thomas Ceccon and Benedetta Pilato after the gold medal swims

It was raining gold for the Italian squad at the swimming World Championships thanks to Thomas Ceccon and Benedetta Pilato. Ceccon became the first Italian to win a 100m backstroke title while Pilato at just 17 years old won the women’s 100m breaststroke.

Ceccon won the final of the 100m backstroke establishing a new world record for the distance. The 21 year old from Thiene clocked a time of 51:60, lowering the record by 25 millisecond from the 51:85 set by the American Ryan Murphy at the 2016 Rio Olympic games. The former Olympic gold medallist had to settle for silver in Hungary with a time of 51:97. Third was Hunter Armstrong in 51:98.

Ceccon’s medal was the first in the 100m backstroke for Italy. The young man from Venezia was unable to hide his satisfaction: “It is a very quick time, yesterday I was also able to do it but I was not expecting to do it so quickly. A world record for an Italian is something big. Few people have done it” he underlined after having been crowned world champion. “Today I knew I had no rival. There were two Russians missing, with them it would have been an even better challenge. The goal isn’t this. It is something bigger.”

Shortly afterwards more success came with the 17 year old Pilato in the 100m breaststroke. With a great comeback in the final 25m, she stormed past her rivals in a time of 1:05:93, beating the German Anna Elendt right on the finish line who finished in 1:05:98 and the Lithuanian Ruta Meilutyte in 1:06:02. Knocked off the podium was Lilly King, the 2017 World Champion in the 50m and 100m, as well as the 2016 Olympic champion, Tokyo bronze medallist and world record holder. The rising star of Italian swimming, a 50m specialist, redeemed herself after a bad day in Tokyo where she finished in a medal position but was later disqualified.

“I was already happy having reached my first world final in the 100m. Having won it is truly amazing. I am so happy and satisfied with my work and performance.” The 17 year old from Taranto commented. “From the silver in Gwangju many things changed. It’s three years that seem like more because expectations are increasingly demanding. I also had a few physical problems that have affected me. I have learnt to react positively to negative results. I am still developing although I remain the youngest in the squad but I enjoy it.”

The excellent performance of the youngster came on a day when Simone Quadarella, the defending 1500m freestyle champion, could only finish fifth in a final dominated by Katie Ledecky. The America dominated in a time of 15:30:15 ahead of her compatriot Katie Grimes (15:44:89) and the Australian Lani Pallister (15:48:96). The Italian finished in 16:03:84. “It was a nightmare” she said at the end of the race.