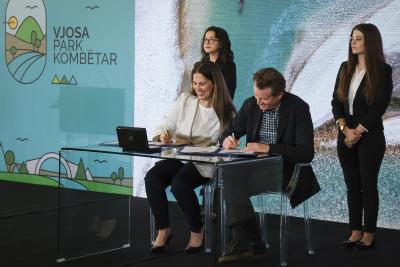 After ten years of dedicated action by local communities, environmentalists, scientists and artists to permanently protect the Vjosa River and its tributaries, on Monday, the Albanian government took the historic step of signing a commitment to establish a Vjosa Wild River National Park. The Wild River National Park will protect the entire network of the Vjosa from the Greek border to the Adriatic Sea, including the free-flowing tributaries. This is something that has never been done before in Europe.

This morning at the National Theatre of Opera and Ballet in Tirana, Prime Minister Edi Rama, Minister for Tourism and Environment Mirela Kumbaro and Patagonia CEO Ryan Gellert joined Albanian and international NGOs from the Save the Blue Heart of Europe coalition in a ceremony to mark the public signing of a Memorandum of Understanding between Patagonia and The Ministry of Tourism and Environment. This is a significant step closer to safeguarding the last big, wild river of Europe.

The Memorandum of Understanding between the two parties includes the agreements:

According to the Memorandum, the signing parties will establish a working group within 30 days to start planning for the establishment of the national park. The park is set to include visitor centers, rangers, and scientific and educational programmes and will yield new economic opportunities for the local communities. This novel action taken by the Albanian government will also serve as a role model for many other rivers in the region; including the Aoos River in Greece which is the source of the Vjosa across the Greek border.

With Patagonia’s long history of protecting wild places, and the Albanian Government’s commitment to do something truly impactful, the Save the Blue Heart campaign members, such as EcoAlbania, Riverwatch and EuroNatur, are going to be actively involved in the journey ahead, to make Europe’s first Wild River National Park a reality. With official, actionable steps, this unparalleled biodiversity hotspot will set a precedent for future nature protection in Europe. 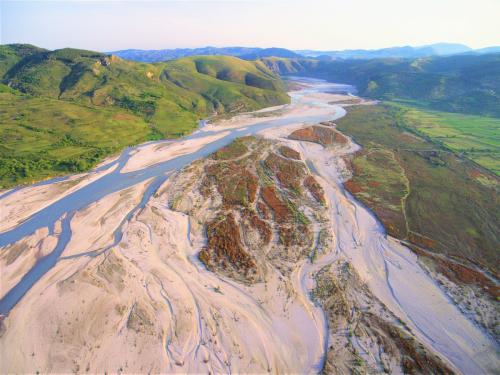