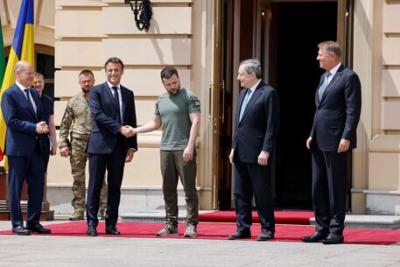 KIEV –Italian Prime Minister, Mario Draghi travelled overnight by train from Poland to Kiev with French President Emmanuel Macron and German Chancellor, Olaf Scholz to meet Ukrainian Prime Minister on Thursday in the first meeting of these international leaders since the Russian invasion of Ukraine.

The three leaders met Ukrainian Prime Minister, Volodymyr Zelensky at a meeting in Kiev to bring “a message of unity and full solidarity of EU countries,” reported the news agency ANSA.

During the visit to Irpin, Sig. Draghi commented: “Here is a place of destruction but also of hope. Much of what they have told me is about the future and reconstruction. People have been brought together by the war, who can do things that perhaps they could not have done before the war.” Scholz added that Germany was ready to support Ukraine “for as long as necessary,” and to “ensure that the aid we are organising continues, financial, humanitarian, but also regarding weapons." Macron declared that France is prepared to “do everything to stop Russian forces and help the Ukrainians and their army.”

During the meeting, a particular focus will be given to the problem of unblocking wheat exports, as well as Kiev’s candidacy for EU membership. Macron has simultaneously relaunched his proposal to create a larger European political community to welcome Ukraine after the completion of the accession process.

Tens of tonnes of wheat risk rotting due to the Russian blockade of Ukrainian ports. Sig. Draghi, supporting an active role of the UN, declared that the opening of safe corridors for transport is urgent and, in the meantime, it is necessary to find a way to store the new crops.

It is thought that the leaders will also discuss weapons, in view of the NATO summit on June 29.