Guoqi Wu, a senior IFAD official from China, presided over the opening ceremony in the Kenyan capital Nairobi and was quoted by China’s state news agency Xinhua saying that “African nations can leverage existing collaboration with China to transform their agricultural systems [and] tackle hunger.”

“The opening of the regional office is a key milestone for IFAD’s decentralisation process, which seeks to build on the achievements by the institution for more than four decades,” Wu claimed. “The increase of our presence in the region is also a demonstration of our commitment to serve the last mile, reaching the most marginalised people.”

Wu said that, among developing nations, China is the biggest donor to the IFAD and had helped finance numerous projects to boost agricultural best practices on the continent.

The stilted language of Mr Wu’s remarks reflected the usual clichés in UN statements. All milestones are surely key by definition, it is strange to suggest that some milestones might not be key. The use of the overused word milestone evidently was so attractive that in the next sentence Mr Wu referred to ‘the last mile,’ without explaining what it means.

It was evidently no coincidence, however, that Mr Wu was chosen to open and praise the new office and that he did so in an interview with Xinhua. Normally it would have been opened by Houngbo but the leader of the agency is jumping ship in October to head the ILO so leaves official duties to underlings.

After China’s Communist Party won control of FAO, headed by Qu Dongyu, in a major debacle for Western policy in the UN, Beijing has turned its attention to taking over IFAD by stealth, diplomatic sources said.

Kenya’s foreign minister, Raychelle Omamo is favourite to head IFAD from October by winning an election for the agency’s presidency to be held July 7 and Kenya depends on China increasingly for investment in infrastructure. Kenya will be looking for Chinese support in the election against pisspoor candidates from Kuwait, India and Spain.

In the IFAD election the West threw away a good chance to recoup lost ground after the FAO fiasco. A strong Norwegian woman candidate dropped out at last minute for mysterious personal reasons, and while EU members may vote for the Spanish candidate he will be shunned by many African and Arab countries following Spain’s recent support for Morocco against Polisario in a policy U turn on the disputed western Sahara, observers say. 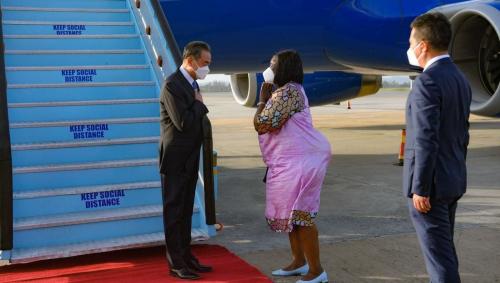