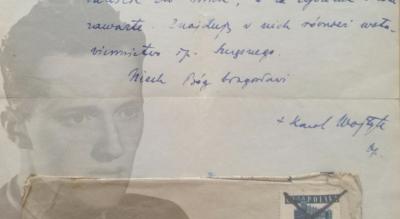 ROME – Tonight at 7:45 pm, the reading of a letter from Karol Wojtyla addressed to the family of his seminarian colleague, Szczesny Zachuta killed in Krakow by the Nazis in 1944, will take place in the basilica of San Bartolomeo all’Isola.

“I am sincerely moved by the letter from the mother and brother of the late Szczesny, my closest friend during his clandestine theological studies. I was then working as a worker at Solvay and I often met with Szczesny, most of the time in church and with the late Jan Tyranowski, who was the spiritual guide of both.”

This is the part of the letter that Karol Wojtyla wrote in 1958 to his seminarian colleague’s family, who was arrested and shot by the Gestapo in Krakow during the World War II. The letter was Wojtyla's response to the good wishes received on the occasion of his appointment as auxiliary bishop of Krakow in 1958. During the World War II Szczesny Zachuta was active in the resistance movement, in the scouting association of the Gray Ranks, and helped the Jews who were victims of persecution.

Tonight, the grandsons of Szczesny Zachuta will do a reading of a letter by John Paul II to the basilica of San Bartolomeo all'Isola, Sanctuary of the New Martyrs. The letter will be introduced on the altar of the new martyrs of Nazism. The family members of Szczesny Zachuta and a delegation from the Community of Sant’Egidio from Poland will participate at the ceremony, presided over by Msgr. Jan Romeo Pawłowski, secretary for pontifical representations.

"It is of great significance for us, who guard this place, to receive a precious memory of Saint John Paul II, who entrusted this basilica to us thirty years ago and who, on the occasion of the Jubilee of 2000, wanted it to become a place of ecumenical memory of the martyrs of our times,”said the president of the Community of Sant'Egidio, Marco Impagliazzo.