Russian Embassy reveal having paid for Salvini's trip to Moscow 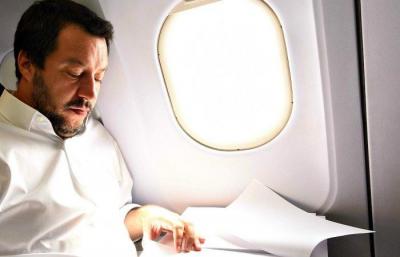 ROME – According to the Moscow diplomatic office in Italy, the Russian embassy "assisted Matteo Salvini and the people who accompanied him in the purchase of airline tickets" to Moscow, which were thenreimbursed after cancellation, as reported by the news agency Il fatto quotidiano.

It was on a Russian airline called Aeroflot and was scheduled on May 29 from Istanbul to Moscow. According to the Russian embassy, assistance was necessary due to the sanctions that have suspended Rome-Moscow flight connections and difficulties in purchasing Aeroflot tickets in Europe.

There is no information regarding the identity of the official who concluded the transaction. According to La Verità, a right-wing newspaper, it is thought to be Oleg Kostyukov, first secretary of the Russian embassy in Italy and son of Igor Kostyukov, director of the military secret service in Moscow.

The Russian embassy claims that after the cancellation of the trip they have been reimbursed the amount that was spent and that there is nothing illegal about this."Tickets to Moscow would have been reimbursed" by Matteo Salvini and his company even if the trip had taken place, the Russian embassy adds, continuing that they assisted them "to overcome the technical problem of payment in rubles."

However, the Northern League denies anyeconomic relations with Moscow, having issued the statement: "No free tickets or paid travel from Moscow." The League also declared that their leader's travel expenses are fully covered by the party.  Futhermore, Salvini has given his lawyers the mandate to sue "anyone who makes insinuations or accusations about the trip to Moscow."