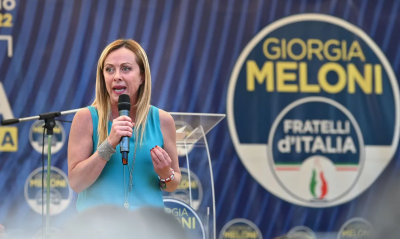 Sunday’s elections covered roughly 1,000 mayoral races, including those in 26 provincial and regional capitals.

In the first major test ahead of Italy’s parliamentary elections next year, the PD emerged as the largest party in the local elections on Sunday. They gained 17.2 percent of the votes, whilst the Brothers of Italy came out next with 10.3 percent, overtaking the League, a far right party led by Matteo Salvini who only gained 6.7 percent of the vote. Forza Italia, headed by Silvio Berlusconi, gained 4.6 percent. Overall, the centre-right were victorious in nine cities, including Palermo, Genoa and L’Aquila.

The Brothers of Italy, the current government’s largest opposition and the only party that stayed out of Prime Minister Mario Draghi’s coalition, saw a success that highlighted Meloni’s growing influence in Italy. Her party's rising popularity in national polls took tangible form in the results of the elections, as it overtook the League, its far-right rival. This success means that the Brothers of Italy could claim the dominant position within a coalition.

The League lost some of its standing in the elections, with a loss of public support for Salvini evident even in northern provinces. In Padua, the Brothers of Italy's electoral list received 8 percent of the vote, compared to the 7 percent gained by the League. The decreased support for the League came after the party’s promotion of the referendum on justice reforms that received a historically low turnout with only 20.9 percent of Italians of voting age turning out, according to media reports. The financial news publication Il Sole 24 Ore described the referendum as a “historic flop”, as it saw the lowest numbers for any referendum held in Italy since World War II. The Democrats’ leader, Enrico Letta, called the referendum “a failure” and declared that such use of a referendum is not the correct route for reforms.

The results proved that the uniting of right-wing parties reaped strong benefits. Meloni challenged the League and FI leaders to join her and leave the Draghi government, told news agency Corriere della Sera.

After the failed referendum, Salvini celebrated the centre-right coalition victory that managed to flip Palermo, usually a strong hold for the Five Star Movement, also within Draghi’s coalition, whose results fared worse than all expectations.

The Five Star Movement's leader Giuseppe Conte was left disappointed by the results of the local election, as the party took a blow across Italy with a particularly symbolic loss in Parma, which was the first Five Star- controlled city. Conte admitted defeat and lamented that the party are paying for their support for the Draghi government, reported the news agency Il fatto quotidiano.

The Brothers of Italy and the PD both benefitted from the local elections and it is head-to-head between the two sides, as reported by Youtrend's analysis. Drawing a national analysis from the results may not provide concrete voter patterns ahead of the parliamentary elections, though it does highlight the trends of individual parties in the territories and the growing strength and influence of Meloni’s party.