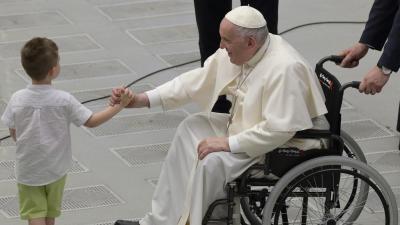 VATICAN CITY – Pope Francis will not preside at the June 19 traditional Corpus Domini celebrations, as a result of ongoing knee pain that has confined him to a wheelchair for over a month, the Vatican press office said Monday.

The Mass and procession with the Eucharistic blessing on the Feast of Corpus Domini (also known as Corpus Christi) will no longer take place due to "the limitations imposed on Pope Francis by gonalgia (knee pain) and the specific liturgical needs of the celebration," the Vatican press office reported on Monday morning.

Pope Francis' ongoing knee pain has also led him to reschedule his trip to Africa in July, leaving the citizens of Congo and South Sudan disheartened at the news.

The visit aimed to make an ecumenical appeal for peace in the two countries, as Pope Francis would be accompanied by the Archbishop of Canterbury and the head of the Church of Scotland.

The July 2-7 trip will take place at a later date, “to be determined”, said the Vatican. Plans were still thought to be going ahead as normal as recently as this week. Pope Francis apologised on Monday morning: “Unfortunately, with great regret, I had to postpone the trip to Congo and South Sudan. In fact, at my age it's not that easy to go on a mission!”

The Catholic communities in the two countries, who were anticipating his arrival with apt preparations, expressed their disappointment, posting messages on social media lamenting the news. The news also signifies a financial loss in the communities due to the expenditure of the preparations.

Nothing has been announced by the Vatican regarding his July 24-30 trip to Canada.