If at first you don’t secede… 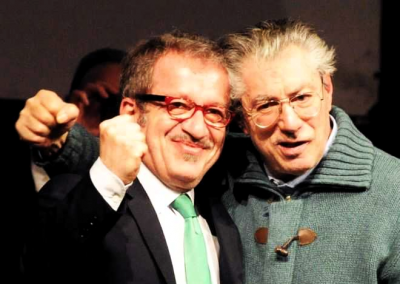 ROME- As bad puns go, this one is old and stale, I know, but the would-be seceders are not exactly fresh, some more than others. The Lega Nord (Northern League, LN) has for most of its 20 years aimed at an independent state of northern Italy, Padania. Roberto Maroni has just taken over from Umberto Bossi as secretary and immediately reiterated independence as the party’s strategic goal.

Maroni has a tough job on his hands. He has a divided party within where Bossi and his supporters (know has “the Magic Circle”) are loath to give up the power, perks and influence they have got used to. Even as he was stepping down, Bossi could not resist sniping at his successor and longterm rival. He compared his action to the judgment of Solomon <http://italia.panorama.it/Lega-Nord/Lega-Roberto-Maroni-contro-Bossi> – the message is that he is the true mother of the Lega and Maroni is an opportunistic fake. Bossi’s status has indeed been drastically reduced by the scandals and his condition but he is not going to retire gracefully; grace has never been in Bossi’s repetoire and he is not going to start now.

The investigations into allegations of misuse of public funds will continue; they will damage the Lega as a whole but more Bossi and his friends than Maroni and no doubt the lead up to next year’s elections will be punctuated with more details of the Bossi family’s expenses charged to the party.

Politically Maroni’s job is no easier. Much of the protest vote at the local elections went to Beppe Grillo’s Five Star Movement (M5S) while those who wanted a steady centre-right party in or near government didn’t vote. For 20 years Bossi convinced up to 10% of the electorate that the Lega was an anti-system, anti-Rome party of protest at the same time as being a responsible party of government. Maroni was minister of the interior until eight months ago. Now he is adamantly against the Monti government and has even canvassed the idea of abandoning Rome altogether; a contrast worthy of Bossi (still known as il capo).

They also have to decide whether they really want independence (or even devolution) or just to look after the interests of the conservative part of the north – the Bavarian model CSU as both Ilvo Diamante <http://www.repubblica.it/politica/2012/07/02/news/lega_congresso_diamanti-38362625/index.html?ref=search> and Angelo Panebianco <http://www.corriere.it/editoriali/12_luglio_02/carroccio-tra-po-baviera-angelo-panebianco_3f4f2ef8-c407-11e1-8a5a-a551a87e60ad.shtml> pointed out.

For the moment at least, Maroni his playing down Bossi’s invented Celtic traditions but there are some superficial similarities with the Scottish National Party (SNP).

They both have declared the goal of complete independence and both feel that they are giving more to the rest of the country than they are receiving. Both have been prepared to play long, waiting games, the SNP even longer than the LN.
But there the similarities end. The SNP is a social democratic party (some would say further to the left) while the Lega is a populist, xenophic centre-right party. In terms of national identity, SNP leader Alex Salmond has a huge advantage over Roberto Maroni. His future independent Scotland has a navel, in Ernest Gellner’s term, while Padania most certainly does not. Gellner divided modern nations into those with precursors or “parents” (and therefore a navel) and those without. Until 1707 Scotland only shared a king with England and even now the Scots have a different legal system and they still have banks of issue. Devolution gave them fiscal powers different from the rest of the UK.

In the UK, Salmond’s announcement of an independence referendum earlier this year led to a flurry of articles about the costs and benefits of an independent Scotland and if he really does move towards a vote, then these arguments will surely trump any memory of Bannockburn (he wants to hold the referendum on the anniversary of the battle in which the Scots defeated the English in 1314) in the same way that Scotland accepted the Act of Union in 1707 for economic reasons.
The breakup of the UK is still a long way off but the possibility is genuinely on the political agenda; an independent Padania is so much hot air.

Both cases as well as Catalonia and the Basque Country might make us face two questions: who decides on a divorce? The smaller would-be independent state or the whole? Only in Czechoslovakia “velvet divorce” was the split genuinely consensual (at least for the two governments). Secondly, how to deal with EU and euro membership assuming that either still exist in their present form in 2013. Do the new Scotland, Padania, Catalonia have automatic membership or do they join the queue with Turkey and Montenegro? Neither national governments nor the European institutions are prepared to address the question until it is posed in a very concrete way.

For the moment, though, these big questions and comparisons will disappear before the campaign questions. First of all, what sort of electoral law will Italy have by April next year? That will condition Maroni’s alliance gameplan. And then, how to capture the dissatisfaction of rising taxes without looking like a aging copy of Beppe Grillo.