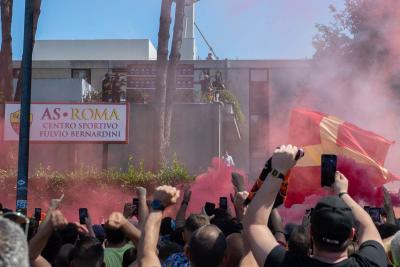 Among those arrested were 48 Italians and 12 Dutch fans.

Local police used tear gas to disperse the crowd after hooded “pseudo” fans dressed in black, wielded clubs, carjacks, stones and any blunt object they could find, according to Italian media reports.

A police car was destroyed and 12 officers wounded in the melee were taken to hospital.

The violence broke out when Feyenoord fans punched a 45-year-old Albanian, who had been taunting the Dutch supporters, singing “Roma Roma Roma."

The Albanian man, who was left bleeding on the ground, was transported to hospital with non life-threating injuries.

Fans reportedly destroyed everything in sight including shops and cars a few hundred metres from Albanian government headquarters.

With 176 flights due to land in Tirana in the next few hours, measures have been put in place to keep supporters separated according to their football allegiance.