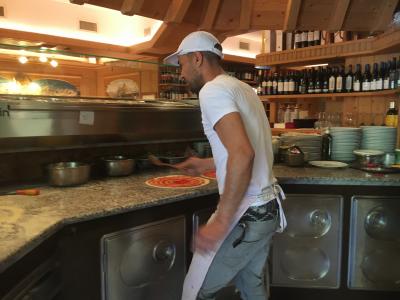 NAPLES – Tourists are flocking back to the city world famous for its pizza, yet the Neapolitan hospitality industry is at a standstill, short some six thousand employees, a retailers’ association said on Thursday.

Hotels, B&Bs and restaurants risk being unprepared for the enormous earning opportunities in the wake of a post-Covid tourism boom for the city in the shadows of Mount Vesuvius, according to new data from FIPE-Confcommerico Campania.
The organisation estimates a worker shortage of five thousand in Napoli’s restaurants and bars, a figure rising to 12 thousand when considering the entire province of Napoli.
The shortage covers all areas of catering from bartenders to pizzaioli, chefs, kitchen-hands and waiters.
In addition to restuarant staff, there is a shortage of porters, housekeepers and doormen.
The causes of the deficit are diverse.
“During the Covid emergency many workers turned to other industries, especially construction,” President of Federalberghi Naples Antonio Izzo explains. “Our sector has lost its attractiveness: the problem often doesn’t concern remuneration but precisely the type of work.
“Especially impacted is the part relating to catering, with a shortage of waiters and cooks, but there is also a lack of receptionists and night porters. Minister Garavaglia mentioned the possibility of facilitating the integration of foreign seasonal workers into the world of work to make up for these shortcomings. It could be an interesting initiative, but we need to evaluate the details,” he said.
Echoing these fears is A.B.B.A.C., the trade association of landlords and B&Bs, which claims out of 100 Neapolitan members there is a shortage of 600 workers.
In some 8,000 structures in the province, this translates to more than 4,000 workers, including room cleaning staff as well as those in the roles of welcoming and checking guests in and out.
Marco Varriale, like many other employers has been looking for staff for months.
“I lack waiters in my Borgo Antico restaurant,” he sighs. “Not just the income: even the boom in food delivery has taken staff away from bars and restaurants.
“With four or five hours of delivery you can even earn between 40 and 50 euros. Furthermore the driver manages the work independently, without having to report to the owner. Some of the food drivers also bring their girlfriends and spend the day on a scooter,” Mr Varriale said.
“I’m opening a new restaurant in Aversa and I can’t find restaurant staff.”
cc
Business
Italy
Travel