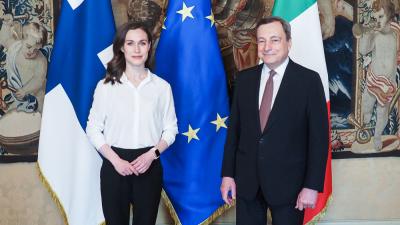 ROME – Finnish Prime Minister Sanna Marin had a meeting with Italian Prime Minister Mario Draghi in the Eternal City this week to discuss reducing energy dependence on Russia, officials said. Their discussions Wednesday focussed on Russia’s war of aggression in Ukraine and on the security situation in Europe.

“The EU has responded to Russia’s aggression with strength and unity. Finland is prepared to impose new sanctions that would restrict Russia’s energy exports. We must reduce our dependence on energy from Russia and accelerate the transition to renewable energy,” Ms Marin said at a joint press conference with Draghi.

Marin visited Rome the same day that Finland officially notified NATO of its interest in beginning accession talks. Marin highlighted the broad public support for joining NATO in Finland. It is also important for Finland that neighbouring Sweden wants to join NATO at the same time.

“Finland’s NATO membership will strengthen Finland’s security and the defence alliance as a whole. Together with Sweden, we will bring stability to the Baltic Sea region and Northern Europe. Finland has a strong, credible defence capacity. As a NATO partner, we already work in close cooperation with the defence alliance. I would like to thank Prime Minister Draghi for showing support for Finland’s NATO membership. Italy can trust that Finland will be a strong and reliable NATO partner,” Marin said.

They also discussed the special European Council taking place at the end of May and explored ways to boost economic and commercial cooperation between Finland and Italy.

During her visit,  Marin was also meeting with two former Italian prime ministers -- the leader of the Five Star Movement Giuseppe Corte and Democratic Party leader Enrico Letta. Both of their parties are part of the current Italian government.