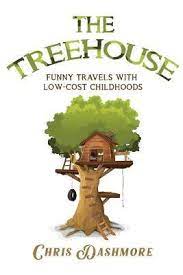 The author states in his prologue that “if the children's perception of a book is not the intended one, it is definitely the author's fault.” In this case, there should be no problem. This is a book full of humour, pranks, whimsy and fun and games that will be sure to strike a chord with readers from 10-12 upwards, parents included. This is Greek-born Chris Dashmore's sixth satirical book and his first written in English. The title comes from the tree house that the narrator, a lively and precocious eight-year old, builds for himself so that he can retreat from the world, parental control and his interfering elder sister Dora. It is also the ideal place from which to aim slingshots at his neighbours' shutters during the afternoon siesta in the quiet Athens suburb where his family have just settled.

At first he has no friends and he is bored. It doesn't take long, however, before he links up with boys like himself to form the gang of “the Ten Beasts” (there are actually only 5 of them) who get up to all kinds of mischief under their leader Thomas the Pious. Fortunately they can count on the help of Helen the Brave, their honorary member, to get them out of scrapes.

Hilarious episodes include pranks like blocking doorbells with sticking plaster, stealing church candles to fuel rockets made of ballpoint pen cases, attempts to have tamed flies produce honey, Blacky the musical dog and the encounters with Htymriah the Extra-Terrestrial visitor from Mars.

The book includes a long and very funny prologue of Dashmore's reflections on writing books for children. “I started by putting into the story mixer personalities of adults with important and serious functions. Plenty of them around and easy to spot. Parents, judges, teachers, priests, customs officers, businessmen, bank robbers. I added characters of noisy, naughty, cunning and disobedient kids. They were also easy to spot. All I had to do was to accompany my two grandchildren to the nearby playground and get inspired by the non-ending havoc there.”