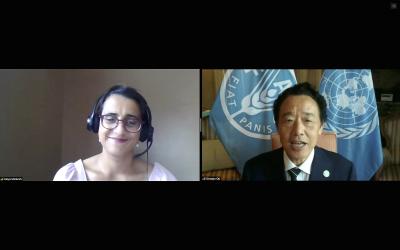 ROME – FAO’s Ombudswoman is investigating complaints that the UN agency abusively is obliging staff and their spouses and children to produce Covid-19 vaccination certificates before honouring employee entitlement to home leave and end of service repatriation, FAO sources say.

“It’s a total abuse,” an outraged FAO employee said. While the current ho-hum leadership of the AP-in-FAO has failed to respond to vaccine hesitant staff’s complaints about the mandatory vaccination policy the UGSS staff union has pledged to take up the cudgels with Chinese director general Qu Dongyu, the sources said.

In addition applicants responding to staff vacancy announcements also are being requested by FAO HR department to produce evidence of vaccination as a requirement for applications to be accepted, in what is seen as a blatant breach of privacy norms and legislation.

Vaccination certificates for staffers’ children as young as 5-years-old also are required for payment of repatriation air fares and removal packages, the sources said.

FAO ombudswoman Katya Melluish has now pledged to examine the practises that seem to be taking a leaf out of the intrusive lockdowns in the Communist DG’s homeland, the sources said.

“This is ridiculous,” Ms Melluish was quoted as saying though in the past ombudsmen’s role at FAO has been little more than whitewashing decisions by the DG, the sources added.

Mr Qu won praise from obsequious Italian authorities for his handling of the pandemic at the agency though critics note that the continuation of tele-working has been convenient for management keen to keep staff and diplomats in the dark about murky management activities and their interface with the Chinese Embassy and Communist Party.

While most Chinese staffers at FAO are, like Qu himself, Communist party members, he has an uneasy relationship with some of the more senior of his senior FAO Chinese subordinates since they are higher up in the ruthless Communist Party apparatus then him and presumably spying on the DG to their masters in Beijing, the sources added.