Pope, in Easter letter to Kirill, calls for peace in Ukraine 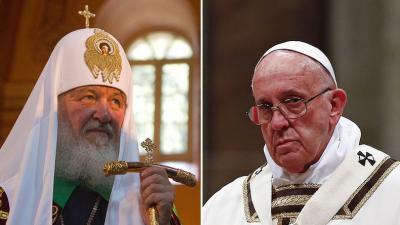 VATICAN CITY – Pope Francis, in a letter sent to the patriarch of Moscow and all the Russians, Kirill on Orthodox Easter celebrated on Sunday April 24, according to the Julian calendar, emphasized the importance of working for peace in Ukraine, the Vatican said.

“Dear brother! May the Holy Spirit transform our hearts and make us true peacemakers, especially for war-torn Ukraine, so that the great Easter transition from death to new life in Christ becomes a reality for the Ukrainian people, longing for a new dawn that will end the darkness of war,” said the pontiff in the central part of letter.

Francis compared situation of wounded people by war to slavery. He emphasized that unfortunately the commitment "for the redemption of slaves" is a very topical theme. “It is so because even in our time, which boasts of having abolished slavery, in reality there are many, too many men and women, even children reduced to living in inhuman conditions, enslaved,” he concluded.

For this reason the pontiff met the participants of the conference ‘International Trinitarian Solidarity’ organized by the Order of the Holy Trinity (Trinitarians). The pope also pointed out that religious freedom is violated in the world in different ways, “some rough and evident, others subtle and hidden.”