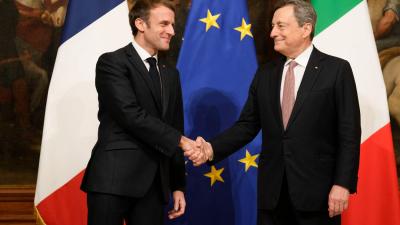 ROME – Italian politicians have congratulated Emmanuel Macron, representing The Republic On The Move party, on winning the presidential elections in France on Sunday, as reported by the Ansa news agency.

The Prime Minister Mario Draghi commented the result of presidential election in France as a “wonderful news for Europe.” Personally and on behalf of the Italian Government, Draghi congratulated Macron on his victory.

“Italy and France are committed, along with all other partners, to building a stronger, more cohesive, fairer European Union, capable of being a protagonist in overcoming the great challenges of our time, starting with the war in Ukraine,” emphasized Draghi. Moreover, the prime minister stands ready to further cooperation in the service of European countries and their citizens.

Macron’s success in the presidential election is described as a pro-European and uniting choice, important in building a strong and cohesive Europe. “Only thanks to a strong pro-European drive will we be able to continue, all together, important battles for the support of citizens, even in Europe,” the Foreign Minister, Luigi Di Maio writes on Twitter.

"A great day for Europe. Thanks to the vote of the French, we are all stronger together," in this way the secretary of the Democratic Party, Enrico Letta commented victory of Macron.

Macron was also congratulated by the president of the M5s, Giuseppe Conte. “The challenges are many and it is important that a xenophobic right wing, which speculates on problems without being able to offer adequate solutions, has not won,” he writes on Twitter.

On the other hand, Matteo Salvini compliments the result reached by Marine Le Pen, presidential candidate representing the National Front party. “Alone against everyone, consistent and smiling, you have collected the vote of 13 million French, a percentage never seen in the past,” Salvini highlighted.